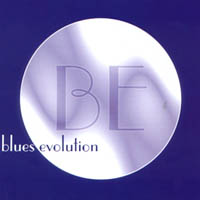 Georgia White sang, "the blues ain't nothin' but a good woman feelin' bad." Duke Ellington came up with the music's most poetic definition. The blues, said Ellington, was "a dark cloud marking time."

For a long time, musically, the blues wasn't nothin' but a simple 12-bar progression, one played and sung by blacks. Then, in the 1960s, whites got the blues. And they weren't just white, a great many of them were British to boot. It was around this time that the blues—much of it anyway—evolved into rock.

A new band, Blues Evolution, now takes the music into the computer age. The blues ain't nothin' but virtual. Based around Pittsburgh vocalist Elexus Quinn, Ziggy True (guitar), who hails from Johnstown, Pennsylvania but now lives in Ventura, California, and drummer Chuck Kerrigan, who learned his trade at Berklee College of Music, Boston, Blues Evolution also features musicians from such seemingly unlikely blues stomping grounds as Belgium, New Zealand, Spain and Iceland. Who the internet hath brought together, let no man pull asunder.

It works like this. Quinn and True compose the music then gradually put together the finished product in the studio, adding all the various components from their friends in cyber space. They function much as Walter Becker and Donald Fagen did (and still sometimes do) with Steely Dan, only sans IT. And, as with Steely Dan, the resulting music is slick and professional but a trifle bloodless on occasion.

Quinn forces his vocals to sound black. On the opener, "Don't Lose Your Mind," he comes on like a latter day Screamin' Jay Hawkins. He wisely takes things down a few notches on "Inspiration," with its quote from the Beatles' "Here Comes The Sun."

The songs are very much rooted in the 1960s and 70s, with echoes of Blood, Sweat And Tears and Chicago.

Quinn and True obviously have high hopes for their love song "Somebody's Everything." It's featured in two versions, one electric, one acoustic.

In between there's "When They Seal The Coffin In My Grave," which cleverly evokes the old New Orleans funeral parades, and the laidback "I'm Here Right Now." The latter is a standout, one of the few songs to escape the prison of the page.

A lot of work has gone into this. They get a very big sound. Quinn and True have talent but are inhibited by their band's portentous name (which promises more than it can ever deliver) and Quinn's overblown vocals.