By HRAYR ATTARIAN
September 23, 2013
Sign in to view read count 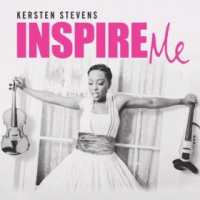 On her fourth release Inspire Me violinist Kersten Stevens has successfully tackled the daunting task of creating a unified work with a large cast of characters and a variety of influences. The central theme of the album, steeped in a strong religious sense, is an exploration of artistic motivation.

"Right Where You Are," for instance, is an original song penned by Stevens (with co-Producer Eric Johnson) and features singer Alicia Olatuja. Olatuja's gorgeously evocative voice emerges from the backdrop of a lush string quartet and guitarist David Rosenthal's gentle acoustic strums. Stevens own violin solo maintains the devotional nature of the music while crackling with spontaneity that stands in delightful contrast to the polished arrangement.

Stevens seamlessly fuses not only jazz and gospel but also western classical and other genres with the common motifs of spirituality and the sacred. The solemn "Total Praise" is an intricate duet with pianist Jere Compere with a heady and honeyed sound that is full of reverence and quiet elation. Her breathtaking pyrotechnics burst with pure joy on the traditional "Because He Lives," the interpretation of which is slightly flavored with Latin spices. Her shimmering violin glides over the percussion and brass vamps and contrasts against keyboardist Damien Sneed 's earthy tones.

Although the pieces that feature Stevens in a more intimate setting are more satisfying, the brass ensembles buoy her joyous playing while tactfully remaining in the background. This is primarily due to trumpeter Christopher Stevens and trombonist Steven Duffy's tasteful orchestrations. Stevens' pairing with vocalists on few of the tracks does not detract from the enjoyment of her musicianship either. In fact, often, it enhances it. Like on "Nobody Like You" vocalist Charles Mack's nimble enunciations and mellifluous intonations bring an instrument-like artistry to the song. Stevens' tender, talking strings, meanwhile imbue it with organic warmth.

Punctuated by intelligent and thought provoking conversational musings on the nature of inspiration, this is a uniquely engaging record. Even though it is not for purists, Stevens' immense creativity and elegant flair make the disc fascinating and aurally pleasing even for those of a more secular mindset.