By JAKOB BAEKGAARD
February 24, 2010
Sign in to view read count 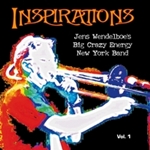 Whenever Norwegian-born trombonist, composer, and arranger Jens Wendelboe starts working with his Big Crazy Energy New York Band, there's a rock-solid guarantee that it won't be boring. With uncompromising energy and an impeccable flair for picking tunes that will make his band swing like mad cats on the prowl, Wendelboe serves up his very own funkified version of contemporary big band jazz on Inspirations, Vol. 1.

Billy Cobham's "Pleasant Pheasant" is an invitation to the dance floor with its fat brass attack, including a line-up of no less than four trombones, complemented by tight, electric bass lines and spacey keyboards.

Part of the charm of the album is the big band's bold readings of compositions as diverse as "Dear Old Stockholm" and The Beatles' "A Day in the Life." On the former, Wendelboe does some tasty scat singing while The Beatles' mellow epic is transformed into an ambitious, orchestral blowout that adds new surprising shades to the challenging structures of the tune.

Wendelboe also throws in four original compositions for good measure. "Boone Dog Café" is pure synthesizer-driven funk and "I Know, Later" swings effectively with surprising use of flutes, but it is two ballads that stand out: the tender "Seasons Wander" features Deb Lyons on vocals while "Ear Trumpet" sports a superior solo by electric bassist David Anderson, reminiscent of Steve Swallow.

Like a good night out, Inspirations, Vol. 1 is able to cover all the different phases needed. From sweaty floor fillers to soulful ballads and funny, experimental moments, it is a record that traverses a wide musical territory without taking itself too seriously. But make no mistake, Wendelboe certainly knows what he is doing and making a big band sound relaxed and yet tight is a feat only accomplished by the very best arrangers. Wendelboe, once again, shows himself to be at the top of his game.