By EYAL HAREUVENI
December 29, 2012
Sign in to view read count 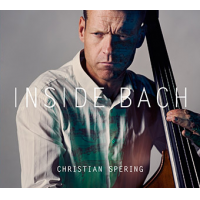 The arrangement of violin sonatas and partitas, and the cello suites of Johan Sebastian Bach for solo double bass is a tasking and rare challenge, especially for improvising bassists. Classically trained bassist like Edgar Meyer have transposed Bach's cello suites to double bass on the critically acclaimed Bach: Unaccompanied Cello Suites Performed on Double Bass (Sony, 2000), but it is still an exceptional achievement. Now, Swedish bass master Christian Spering offers a different insight into the composer's timeless music.

Spering chose to play Bach music pizzicato—plucking the strings instead of using the bow as any typical violinist or cellist would have done—with minimal usage of extended techniques. This humble aesthetic still bears a strong fidelity to the composer's notation but enables Spering to uncover the inner architecture of Bach's most intimate and elaborate compositions. It also stresses Spering's natural melodic flow and warm sound, adding a contemporary touch to the music.

The album was recorded in Spering's house, an intimate atmosphere which contributes to his relaxed and serene playing. Spering's unique violin partitas arrangements—written in dance-form movements—allow the bassist uncover Bach's sophisticated, playful improvisations on these delicate forms. His arrangements of "Violin Partita No. 1 in B minor, BWV 1002: II. Double" and "Violin Partita No. 1 in B minor, BWV 1002: V. Sarabanda" even swing lightly. His thoughtful arrangement of the peaceful yet technically demanding "Cello Suite No. 4 in E flat major, BWV 1010: IV. Sarabande" is simply outstanding.

Spering's originals, "Elegia" and "Zona di Passagio," are tributes to Bach's masterful structuring of counterpoint and polyphonic musical forms. With the addition of looping, Spering plays these long compositions con arco—with his bow—also using it for gentle percussive sounds. He transforms Bach's forms into stunning, expressive textures of deep sounds—rich in polyphonic detail—his sensitive explorations of dark timbres and reserved drama demonstrate a commanding mastery of the double bass.

Spering's arrangements of Bach's timeless music, re-envisioned for double bass, sound organic and true to its original form, while being open to an intimate and personal interpretation that transcends genre and tradition.