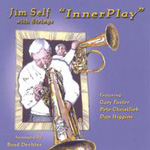 Jim Self has been an accomplished tuba player for many decades. Despite the fact that he spent several years in the Don Ellis Orchestra and his recorded history dates back to the early-1960s Jon Hendricks Evolution of the Blues session, most of his work has been on Hollywood sound stages. He has appeared on over 1,300 film scores, including his memorable appearance as the "voice of the Mothership" in Close Encounters of the Third Kind. In addition to taking the tuba to new levels of creativity in films, he has also accomplished the same in jazz music by taking advantage of his ability to coax the instrument into new levels of emotionality. Self co-invented the fluba (a combination of tuba and flugelhorn), which is also heard on several tracks here.

The completion of the InnerPlay project took almost five years, including three separate recording sessions that utilized three different rhythm sections, including some of Los Angeles' best players, and the Jay Rosen Strings. I've never been a real fan of the use of strings in a jazz setting. In this case, however, they remain unobtrusive, provide a beautiful coloration for the finished album and are undoubtedly shown to their best advantage by Brad Dechter's arrangements.

Self is just not along for the ride on this album. He is the principal soloist on most of these compositions, placing himself alongside saxophonists Pete Christlieb, Gary Foster and Dan Higgins. The album opens with Herbie Hancock's "Speak Like A Child," where Self's tuba states the melody and supplies a supple solo statement, after which he shares the stage with Dan Higgins' soprano sax. The piece brings back the days when Ray Draper used the instrument in a small late-'50s combo; Howard Johnson did the same thing more recently. Isham Jones' "There Is No Greater Love" comes out of the gate swinging, with Self playing the fluba. The hybrid instrument allows Self to communicate a lightness in his playing, and he shares a solo with Pete Christlieb on tenor sax.

Clare Fischer's jazz standard "Pensativa" sounds more mournful than usual. The tuba melody statement and solo at the high end of the instrument's range, plus the bossa treatment and Gary Foster's flute, all combine to make this tune another highlight. You must prepare yourself for the version of Gershwin's "I Loves You Porgy," though. Undeniably one of the sadder love songs, it begins with a harp intro from Gayle Levant. Self's plays the timeless melody dramatically and then solos, after which the entire ensemble enters to support Christlieb's tenor sax.

There are many other noteworthy moments to look foward to, until the album ends with "Do You Know What It Means To Miss New Orleans." This song, which is usually played at dirge tempo, is led here by the sorrowful presence of the tuba. Whether intended as a tribute to the losses of Hurricane Katrina or not, the performance serves as a sad reminder.

Speak Like A Child; There Is No Greater Love; Pensativa; I Loves You Porgy and Bess You Is My Woman; Cipriana; That Morning in May; The Underdog Has Risen; No More Blues; Strollin'; Do You Know What It Means To Miss New Orleans.