By JOHN EYLES
September 3, 2011
Sign in to view read count 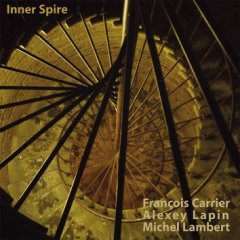 For Inner Spire, his fourth release on Leo records, Montreal-based alto saxophonist François Carrier performs with a new trio, retaining his long-standing collaborator Michel Lambert on drums and replacing double-bass with piano, played by Alexey Lapin. Recorded at the DOM Cultural Centre in Moscow in December 2010, the album's five tracks were entirely improvised. That is not immediately obvious as, without any tentative warming-up period, right from the start of the title track Carrier and Lapin are in full flow, confidently spinning out coherent melodic lines with ease. They are ably supported by Lambert's drumming which matches their fluency and confidence. Altogether, the three sound like a grouping that has been together for many years and are all tuned into each others' playing and instincts.

Carrier's playing indicates he is an improvising jazz player more than an improv player, unsurprising given his professed love of the jazz tradition and his habit of playing along with his heroes' discs. He favors swooping runs and is not shy of using repetition of phrases to add emphasis and build excitement, amply demonstrated by his storming solo feature at the end of "Square Away." His love of the music is as tangible and infectious on disc as it is in person.

This is an impressive debut from a fine trio. Let us hope a sequel follows soon.