By HRAYR ATTARIAN
February 17, 2019
Sign in to view read count 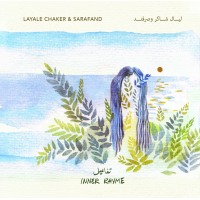 Arabic poetry is the primary source of inspiration for Lebanese violinist and composer Layale Chaker's innovative and vibrant debut Inner Rhyme. Recorded in New York with her band Sarafand (named after a Palestinian village that was abandoned in 1948) this original music is full of subtle wit and sublime emotion.

In crafting this exquisite album, Chaker transposes traditional Arabic poetic meters to rhythmic ones. She also draws upon her western classical training as well as her Levantine heritage with its multi-ethnic songs, both secular and sacred.

The works of certain 20th century poets have also influenced Chaker. The opening track "Return to Jaykur" is based on Iraqi writer Badr Shakir al-Sayyab's similarly titled paean to his hometown. The nostalgic and lyrical piece showcases plenty of spontaneity as Chaker and pianist Phillip Golub exchange contemplative and angular phrases over their bandmates' rumbling rhythms. Chaker's clear and resonant tones contrast hauntingly with Charkey and Dunston's darkly reverberating strings.

Equally mesmerizing is "Alight Here" which allows for individual expressions as well as a dynamic and ethereal ensemble performance. Chaker's melancholic violin soars while Charkey plays a sinewy and lean melody that simmers with reserved fervor. Cascading keys, hinting at the sound of the qanun (middle eastern dulcimer), mark Golub's bittersweet solo. Dunston's thumping strings and Maalouf's percolating percussion form the vivid pulse at the core of the track.

With this impressive first release Chaker has not simply fused genres, she has transcended them. Her eloquent and poignant compositions are simultaneously earthy and spiritual, provocative and passionate. Inner Rhyme is a hell of a start to an artistic career.