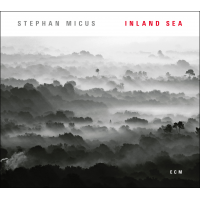 Like an actual inland sea, the Stephan Micus catalogue stands as a unique entity distinct from all its surroundings. Always too restless to rely on familiar sounds, he travels to find little-known instruments in far corners of the world and take time getting to know each one's voice. His 22nd ECM recording is centered mostly around the texture of the nyckelharpa—a Swedish fiddle with built-in sympathetic strings. In supporting roles here (as it were) are the genbri, a Moroccan stringed bass instrument, and a small range of zithers with a couple other exotic odds and ends.

Micus uses an unusually long bow to coax extended drones from the nyckelharpa, often stretching the metallic notes to weave slow contemplative lines that float in the air—a far cry from its usual role in fast-paced dance music. He also uses the instrument's traditionally European sound for trance-like drones that would be suited to the unhurried meditation of Indian music. His low vocalese in "Flor del Sur" is in keeping with the Asian tradition as well, while other tracks make use of steel guitar or Japanese bamboo flute. Micus doesn't deliberately cross those boundaries so much as ignore them—the goal is to forget the rules and simply let his ears suggest where each element belongs, irrespective of what its 'proper' role might normally be.

While the album's title can refer to possible hospitable climates and civilization, the sparse music nonetheless is much more suggestive of something vast and desolate. Some pieces consist of just two or three tracks, while the bigger arrangements (up to thirteen instruments in the centerpiece "Dancing Clouds") are still airy enough to evoke an empty desert-scape stretching to infinity. Even the overdubbed sixteen-voice choir of "Virgen de la Mar" underscores the empty feeling rather than lessening it.

The cast of instruments may happen to be rooted in Europe and Asia this time, but Inland Sea is a beautifully textured soundscape not tied to any time or place. With airy tones and earthy twangs, Micus grows something both worldly and otherworldly—mysteriously alien but with something familiar and organic underlying it all. It makes for an atmospheric listen as alluring as it is unclassifiable.