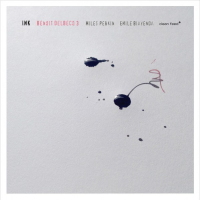 French pianist Benoit Delbecq came late to the piano trio, having spent 20 years on a variety of other projects. His previous foray into the terrain, The Sixth Jump (Songlines, 2010), featured bassist Jean-Jacques Avenel (who sadly died in 2014) alongside Congolese drummer Emile Biayenda, who first toured with the pianist in the Central Africa in 1994 and has been a regular collaborator ever since. Canadian Miles Perkins has since taken on the bass chair, completing an adaptable ensemble who move between support and propulsion for Delbecq's oblique constructs and an egalitarian ethos in which each instrument takes a similarly prominent role.

As such the bassist is just as likely to propound the melodic statements as the leader. He switches ably between meter and lyric commentary, most strikingly in an unaccompanied passage at the heart of "Nombre." At times his deep booming notes reimagine the bass as a drum. Not that Biayenda needs much help in that regard. He maintains a chattering pulse and notably draws on his heritage to inventively inform the knotty grooves that pepper the program.

With his idiosyncratic piano preparations, Delbecq often edges into the percussive territory of his colleagues. His signature style is evident from the off on the hypnotic give and take of "Le Ruisseau" which variously evokes thumb piano and traditional Pygmy music. He thoroughly buys into Cecil Taylor's vision of the piano as 88 tuned drums. He drops occasional dampened or modified notes into even the relatively straight ahead sequences, though the pianist persistently mines the abstract. As fellow pianist Fred Hersch puts it in the liners, Delbecq is able to create improvised lines that allude to tonality yet never are chord specific.

In a studio session of ten short cuts, Delbecq's compositions are opaque, though they offer ample scope for interaction between the constituent elements. They seem more about concept and atmosphere than anything hummable. There's a palpable restless energy in many of the pieces which chop and change between multiple parts. "Ronchamp" illustrates the point. It starts with a ballad feel which quickly becomes blustery, before unfolding into a fast flowing trio section, and then back to the initial ballad feel. All this within the opening two and a half minutes.

"Three Clouds" is spacious and airy. Delbecq and Perkin establish a tricky off kilter pattern, before the pianist demonstrates his facility with a wide ranging left hand excursion. "Family Trees" comprises another earthy groove, against which Delbecq strikes repeated tremolos and turbulent runs. Perkin's pizzicato introduces the title track which eventually settles into a vamp with choppy drums and free form piano, before finally contradicting the norm by moving into a funky unison to end what is an enigmatic but often rewarding recital.