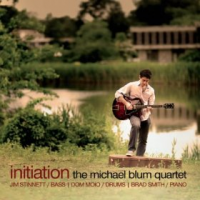 Presenting an equal balance of originals and familiar jazz standards in stylish fashion, the very appealing Initiation is the inaugural album from Hanover, NH—based Michael Blum and his vibrant quartet. Blum is a twenty-year old guitarist and student at Dartmouth College with a passion for jazz. His interest in jazz as a serious pursuit, drew him to study with bassist and renowned educator/clinician and Professor at the Berklee School of Music, Jim Stinnett, who was so comfortable with the young guitarist's development, that his encouragement to document his playing, led to this strong debut. With the help of mentor Stinnett—who not only plays acoustic bass, contributes several compositions and serves as the album's producer—Blum assembled a seasoned cast of players providing stellar support as the young leader's first band.

The program begins with the light and warm "Rebecca," an original contribution from the bassist, where the guitarists' appreciable talents are immediately on display, followed by a brisk interpretation of the Victor Young standard "Stella By Starlight" featuring pianist Brad Smith. The band's play takes a hard turn on the up tempo burner "Castle Rock," providing bassist Stinnett and drummer ((Dom Moio}} strong solo spots without overshadowing Blum's own performance. One of the definite highlights on the disc has to be the superb rendition of the time-honored classic "When Sunny Gets Blue," a beautiful harmonization of the melody.

The slow and almost humbling "Six Weeks," is the guitarists' only original piece of the album which, allows the guitarist the opportunity to perform in an intimate duet with mentor Stinnett as well as providing ample space to demonstrate his skills on the instrument. Blum plays Brazil with a tasteful treatment of Antonio Carlos Jobim's immortal "Corcovado" supported by the beats and cymbal accents from Moio, turning into a pleasant jam session with every band member getting into the act. The perky and melodic Stinnett original, "High Summer," is the perfect album closer showcasing the quartet once again.

No doubt about this one, Initiation is an impressive beginning for the young student who, with this stellar debut, marks his formal acceptance into the jazz world of recorded artists. Michael Blum plays with seemingly flawless technique, whose musical style and driving ambition, may one day carry him to elite status.

About The Michael Blum Quartet