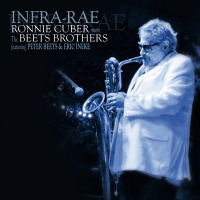 It is easy to forget an elder statesman such as the magisterial Ronnie Cuber, who continues to give commanding performances on his baritone saxophone. The absence of a sense of history clouds successive generations, who will honor young masters like Brian Landrus but forget the ancestors. The great tones from the bass end of the saxophone family would be nothing without men such as Harry Carney, Gerry Mulligan, Cecil Payne, Pepper Adams, and of course, Cuber. The saxophonist, who was a charter member of Eddie Palmieri's band, is currently a longstanding member of the Mingus Big Band and leader of great repute on many albums as well.

There is also the phenomenon of the music industry, where jazz is better appreciated and understood in Europe and appears to be thriving on boutique labels as well as established giants. So it comes as no surprise that Cuber can cut an album in the Netherlands with a group little known elsewhere: The Beets Brothers. The alliterative moniker with which this band is known belies true worth and Cuber makes the most of it. Cuber can set any ensemble aflame—as his chops on the marvelous recordings he made with Palmieri and the Mingus Big Band attest, in addition to solo efforts such as Infra-Rae: Ronnie Cuber Meets The Beets Brothers. Cuber's ingenuity is such that he is fluent in almost any idiom. The manner in which he soars like a growling bird in the bebop mode is staggering and utterly memorable.

Here, as elsewhere, Cuber eschews the cool sound of the West Coast that came to be the hallmark of the baritone after Mulligan blew his way across the stratosphere. Cuber lights up his reed and continues to blow hot and holy, playing in a swirling, beguiling curvilinear manner. His phrases may be short or long, as the music demands and as his ideas flow, but they sound like the evolution of a brilliantly creative musical edifice whose architecture is stylishly modern and breathtaking to behold. There are many memorable moments on Infra-Rae, but none quite as commanding as on "Cubism" where Cuber plays with rare and masterly gravitas, crafting each note and phrase as if he were proudly creating a new linguistic framework for the baritone. This is shortly after he caressed the language of the elders in an achingly beautiful performance of "Lover Man."

Cuber demands much from The Beets and, throughout the session, they are up to the task. Pianist Peter Beets plays like a great listener and solos with wry humor and refreshing flair each time he takes leave of the ensemble. Marius Beets travels all over the double bass, finding space in each solo to inhabit with wonderful melodic inflection. Tenor saxophonist Alexander Beets graces two tracks and is up to the elevated task that Cuber sets for everyone on this utterly beautiful album.