By FRED BOUCHARD
April 3, 2007
Sign in to view read count 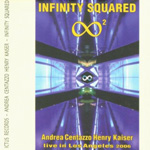 Nigh three decades are flown since these two weird brothers met and they recreate some of their own internal thunder, lightning and hailstorms here. Italian percussionist straordinario Andrea Centazzo has deepened his fascination with tintinnabulatory trinkets, sonic booms and visual-media outings (lost here), while guitar bad boy and madcap collaborator Henry Kaiser has honed yet broadened his cultural horizons (a celebrated series with Malagasy musicians) and unbridled explorations of plectra. These guys set each other off like sodium and chloride, splitting from simple table salt into dangerously electrified ions.