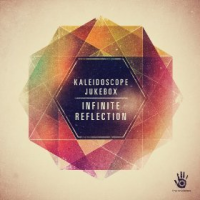 Infinite Reflection by Kaleidoscope Jukebox doesn't really go on forever. But at 75 minutes, it is an overflowing, thick mix of trip-hop, hip-hop and globetrotting sounds, masterminded by multi-instrumentalist, DJ and producer Clint Carty (who has remixed music for Thievery Corporation, Loopez, Second Sky and others). "I wanted this to be unique in name, vibe and emotional receptivity. Music which is just as much felt as it is heard," Carty explains. "It's soul music in the biggest sense. I write music to both challenge the spirit and keep it in check, to wipe away misconceptions you and I may gather along our paths and for a short time possibly get a glimpse of truth."

Its first three songs melt together into a thick carpet of trippy groove. Carty's production of "The Unpossible" is sparkling and impeccable: Vocal and musical themes bounce and echo off the fat beat, and wobble and moan in chorus against Teddy Jones' multitracked lead saxophone. Jones' sax burns more urgently through "Vibration Science," which the drums pick up in intensity to meet. In between, the title track swirls wooden percussion, acoustic piano and guitar, and synthesized strings into a deft, intricate melodic groove splattered with voices from obscure conversations and angles. It's as trancelike and repetitive as Pink Floyd, yet with a wonderful rhythm from guitar and percussion that toy with the beat.

But the longer this music plays, the less impact it seems to have. By the time you work through to the closing "By the Light of Dawn," the last several tunes pretty much seem indistinguishable from the rest.