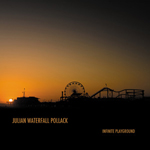 Musicians are often looked at in terms of their influences, mentors and roots, as if those things constitute some homeopathic magic. Though they don't, they provide convenient markers to use in weighing a frequently intangible level of talent. Twenty-two year-old jazz pianist Julian Waterfall Pollack arrives on the scene as if completely formed, full of innovative insights, technical skills and lyrical nuance. Pollack, bassist, Noah Garabedian and drummer, Evan Hughes have previously served as rhythm section for Joe Lovano and, as a trio, opened for Chick Corea at the Blue Note—in both cases, generating some very high praise. Pollack's first release, Infinite Playground is so good it could be a milestone in the catalog of many veteran musicians.

Case in point: another reworking of "Summertime" could easily be a prescription for mundane but, as the opener on this disc, Pollack infuses the tune with incredible energy and innovation, making it as fresh as a new composition. Similarly, Lennon & McCartney's "And I Love Her" follows and, while paying respect to those masters, Pollack again breathes new life into the song and makes it infinitely more interesting than so many jazz covers of The Beatles. Next up is the first of five original Pollack compositions, "Blue's Knot"—a blisteringly fast, post-bop romp that is executed flawlessly and with a beautiful bass line from Garabedian. And while the technique here is very impressive, it is no less so than this young musician's ability to compose and arrange on such a complex level.

Pollack changes tempo dramatically on "Lily," another original. Spare and a bit melancholy, it is one of the more quietly appealing tunes on Infinite Playground, allowing a moment experience just how versatile Pollack is. Hughes brushes effectively, creating a breeze that carries both Pollack and Garabedian across the landscape. If there is a brilliant one amongst these ten gems, it's "Death of Hamlet," opening with the touch and expressive depth of a Chopin nocturne. Pollack then picks up the tempo considerably, putting emphasis on texture and melodic improvisation before returning to a nuanced solo.

Jazz has often demonstrated an inherent will to survive, thrive and adapt with a mixture of the expected and the unexpected. Everyone has their own benchmarks for when the genre became a personal choice—Keith Jarrett's The Köln Concert (ECM, 1975), Miles Davis' Bitches Brew (Columbia, 1970), or John Coltrane's A Love Supreme (Impulse!, 1965). It's typically a point where innovation meets something once again intangible, and Julian Waterfall Pollack will represent that place-marker for some. They will hear a young man who can take "Cherokee" or "Time After Time" and make them his own, or they will hear new compositions like "Blackberry" and "Forewarning," and realize that there is some extraordinary creative force at work here. Pollack should be around for a very long time, for those who don't get in on the ground floor.

Summertime; And I Love Her; Blue's Knot; Lily; Blackberry; Cherokee; My Funny Valentine; Forewarning; Death of Hamlet; Time After Time.