By MARTIN GLADU
September 3, 2008
Sign in to view read count 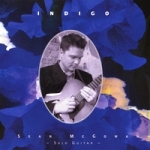 "When the smith gets wildly excited, 'tis best to agree with him," warns the Gaelic proverb. Needless to say when a person's full name translates into "Oldest Son of the Smith" the weight of such patronymic suddenly takes a whole new importance. Fortunately, guitarist Sean McGowan need not resort to swinging heavy apparatus to elicit the same reverence fellow clansmen vowed his ancestral namesake. Quite on the contrary, he is armed with only a Brad Nickerson-made hollow body guitar that finds him hammering it out with the lithest of touch on his self-produced solo effort, Indigo.

Transplanted cross-nationally in Los Angeles from his native Maine to complete a Doctorate In Musical Arts at the University of Southern California, McGowan now holds base in the Colorado Rockies as faculty at the University of Colorado Denver. Drawing essentially from the Joe Pass, Lenny Breau, and Chuck Wayne-style idiom and its correlative repertory of Broadway show tunes and bebop standards, he shares his predecessors' rhythmic drive and melodic grace while incorporating a few snazzy moves of his own.

Indeed, thanks to his indefectible swing and solid technique—which includes a healthy mix of organic-sounding, guitaristic tricks such as tapping, sweeping, artificial harmonics, hammer-ons, and walking bass lines arrangement—he arrives at breathing freshness into a format perplexing for its intrinsically limited nature. His take on "My Romance," for example, offers highlights of this balanced approach, involving contemporized harmonic coloring and traditional fretboard maneuvering. For an introduction to his cascading, florid exposition of the theme, he uses constant tones in the melodic voice as a pedal (as opposed to the usual bass voice) on which he superimposes arpeggiated, dense voicings. On the other Rodgers & Hart composition, the too-often forgotten ballad "Where Or When," he de-tunes to a low C and launches into what is arguably the most beautiful and haunting performance of the song in recent recorded history.

Playing the blues, standards or bebop anthems, fiery 16th-note lines or suspended harmonic constructs, Sean McGowan has found his niche amongst the best jazz guitar soloists. He is to be commended for simultaneously averring the stylistic elements of the tradition while developing tasteful ways to circumvent technical requisites. In fact, he may very well be considered one of the most dignified successors of Lenny Breau's ill-fated legacy. In any event, whether savoured with a creamy draught, or a comforting single malt whiskey, Indigo shall tame the thirst of those longing for a good ole' solo jazz guitar showcase. Sláinte!

Stolen Moments; I'm Old Fashioned; My Romance; Indigo; Confirmation; Polkadots & Moonbeams; Tere WIll Never Be Another You; Theo Brown; Prelude To A Kiss; Where Or When.