By RUSSELL MOON
November 25, 2003
Sign in to view read count 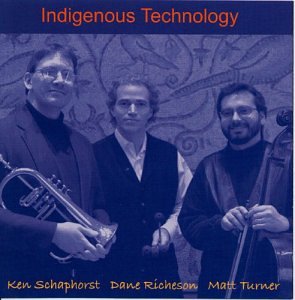 Ken Schaphorst is associated with big band albums, the best known and best distributed, I suspect, being Purple (Naxos, 1998).

With Indigenous Technology Schaphorst takes a new look on the jazz trio. Schaphorst plays trumpet, flugelhorn or piano on the record alongside cellist Matt Turner and marimba/percussion player Dane Richeson. There is no drummer here.

It would be fair to categorize this recording as New Age, but the featured improvisation is far better than that genre's usual light fare, perhaps most comparable to the longstanding group Oregon. A few years ago violinist Daryl Anger, pianist Barbara Higbie and steel drummer Andy Narell recorded an album entitled Live at Montreux (Windham Hill, 1984) which offered a sound similar to that of this disc. Turner's use of the cello in higher octaves may also remind listeners of the Penguin Cafe Orchestra's violin.

Schaphorst is currently the chair of the Jazz Department of New England Conservatory, whose faculty also includes Steve Lacy, Cecil McBee, Danilo Perez and Paul Bley. From 1991 through 2001, he served as chairman of the jazz program at Lawrence University in Wisconsin. It was there that he joined forces with Turner and Richeson.

Schaphorst wrote all of the selections except two credited to the trio. None of them has a catchy melody; every piece is quiet and would be welcome at a dinner party of sophisticates. The tunes were written with the voicings of this trio in mind, and as such represent interesting experiments in sound.

The most noteworthy tracks are "Mode for Max," "Shades of Bronze" and "Translucency," which feature Richerson's marimba playing in unison with Schaphorst's piano. Schaphorst's trumpet has a round tone which is particularly effective in "Desert Places" and "Invisible Choir."

Indigenous Technology is not going to be embraced by those who rush out to buy the latest Blue Note hard bop reissue. But it will be most welcomed by those who appreciate classical music and New Age as well as jazz.