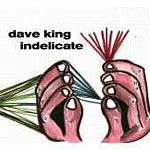 Indelicate has nothing to do with a musician, who plays one instrument, feeling compelled to make an album playing another—alone, or together with his instrument of choice. It is about expanding the sound canvas by using a palette to create a broader range of tonal color and textures. It really ought to have nothing to do with angst either. In the end it can be driven by an emotional belief or socio-political persuasion that becomes a kind of manifesto. Indelicate is all of these things and more; an elastic, oddly moving album that bares all, by a percussionist who turns his other instrument (also percussive) into a harmonic extension of the drums.

When Dave King brings his music to the piano, he extends the drums' palette to include the piano's resonant tonal colors, accentuating the percussive interpretation of songs played on his drum set. Using the three piano pedals, he permits strings to resonate for short and long periods to prolong their effects on his developing ideas. The strings vibrate for short periods, for example, on "Homage: Young People," characterizing the brutally short attention span of Gen-Xers, while "Highly Varnished" is equal parts irony and eloquence. The feeling of emptiness and foreboding on the haunting "The Black Dial Tone of Night" is heightened by the drums' clipped tones, rubbing like a cricket's hind-quarters against a piano; almost rough, echoing with the wet gloom of darkness. Fortunately, all of this changes when King's mood of triumph ends the set with the truly elevating "I Want To Feel Good."

In the end, it matters not whether each song has a specific meaning or is written and played to bring about or signify a desired effect. With Indelicate, King explores bringing together and altering the roles of two percussion instruments, with the drums becoming a lead, melodic voice and the piano a harmonic, percussive one. With intelligent compositions that float on shifting pulses and simple, yet bright, melodic patterns, he has produced an enduring work of thoughtful, serious, modern music.

As a drummer, King has nothing more to prove, his stints with The Bad Plus and Happy Apple leave no doubt about his capabilities. With Indelicate, he gains new respect as a musician unwilling to let the predictable become a way of life.