The Ballpeen Monks: Incident in Oniontown

By KARL ACKERMANN
April 1, 2019
Sign in to view read count 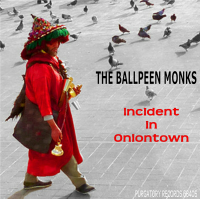 Incident in Oniontown finds The Ballpeen Monks re-emerging as the most musically wide-ranging collective of their generation. Despite the quintet undergoing massive changes—only one member remains from the original quintet—the group displays a consistency that has been their hallmark since their debut album A Meeting in Daisyfuentesville (Self-produced, 1994). The infighting that resulted from that moderately obscure release led to a ten-year hiatus, but when founder and bassist Angus Drummond reconvened the original band for Live in Formica (Das Kapital Records, 2004), it proved to be their breakout album.

The reconfigured Ballpeen Monks were fortunate in adding reed player Fluoride Parker Jr. whose seminal work with The Feartones makes him a perfect fit for Drummond's jauntily harrowing improvisations. Pianist and saxophonist Harper Hathaway came on board with the release of The Therapy Sessions (OkeyDokey, 2008) where she added her wordless vocals to the epic suite, "Weehawken, Bloody Weehawken." Percussionist Valentine Mott and pianist Gax Gruit were part of the original touring band but had not appeared on previous studio releases. Their live work with The Ballpeen Monks can be heard on the eight-disc box-set compilation The Deliberately Lost Recordings 1995-1999 (Blue Nose Records, 2012).

The album opens with "The Cucumberence of Things" and, as the title may indicate, it is a complex study in obsidian overtones and psychologically disturbing configurations. "House of the Rising Crust" is a weak spot on Incident in Oniontown; the concept is half-baked with Hathaway's crunchy vocal clashing with Gruit's monosonoric bandoneon. "Circadian Rhythms" manically swings from frenetic free-jazz passages to cloying sentimentality. Parker ties the divergent moods together through the remarkable dexterity of his duduk. Hathaway stands out on this piece, playing piano and saxophone simultaneously (with some mechanical assistance) and mastering the physical and mental challenge. "Canción Tonta y Tonta" begins with hints of a Cuban rumba but, as Mott's Tibetan singing bowls reach a pitch too high for human ears, the piece takes on earth-ending severity.

Surprisingly, Drummond remains in the background for much of Incident in Oniontown. However, his overuse of the gong—rumored to be a catalyst for frequent personnel changes—is often the frame in which he appears. That said, the album is still packed with the unexpected—Mallorquín beats, Pottoka rhythms, and subtle electronics. Let's hope this new formation of The Ballpeen Monks can check their egos long enough for a follow-up album.

The Cucumberence of Things; The Venus Armchair; Variations on a Standard Deviant; Portrait of the Artist as a Shrunken Head; House of the Rising Crust; Circadian Rhythms; Soon Enough, She Stopped Writing; Canción Tonta y Tonta.

About The Ballpeen Monks