Anders Jormin: In Winds, In Light

By JOHN KELMAN
September 1, 2004
Sign in to view read count 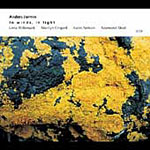 While those familiar with bassist Anders Jormin's recorded work on the ECM label with Tomasz Stanko, Charles Lloyd and Bobo Stenson will think of him as clearly jazz-centric, albeit adventurously so, the truth that emerges from his numerous recordings on the Swedish Dragon label is that of an intensely personal artist, whose vision places no boundaries on his muse. His first release as a leader on ECM, ''01's Xeiyi , which alternated deeply lyrical solo bass pieces with moving works for brass ensemble, demonstrated an artist for whom there is no norm.

Continuing to show that music is not something to be pigeonholed, rather it just is , his second ECM release, the inspired and emotionally cathartic In Winds, In Light finds Jormin in a more expansive mood, with a broader view and a wider perspective.

In Winds, In Light originated as a commission to create new sacred music, but instead of creating a straightforward song cycle, Jormin has instead composed a work that incorporates lyrics by Swedish poets Harry Edmund Martinson, Pär Lagerkvist, Johannes Edfelt and Lotta Olsson-Anderberg, along with William Blake and Jormin himself, into a series of songs that meld extended compositional form with a more exploratory improvisational concept.

The core of the group is Jormin, pianist Marilyn Crispell and percussionist Raymond Strid, a unit that has worked together over a period of years. Renowned classical organist Karin Nelson demonstrates an ability that reaches beyond her reputation in baroque improvisation, into a more contemporary context. Swedish singer Lena Willemark is known to ECM fans as the singer for two groups centred on the folk tradition, the Nordan Project and Frifot. But with Jormin's compositions and lyrics that expound on the larger concept of spirituality in the firmament, Willemark proves herself to be a more profound vocalist, sometimes caressing the lyrics, other times screaming them in almost existential pain.

Jormin's pure pursuit of musicality and art places substance far ahead of style. While the talent of the ensemble is unquestionable, the needs of the music come first; the musicians' contributions are rife with personality while, at the same time, completely without ego, responding to the spiritual demands of the song cycle with a combination of devotion and numinous abandon.

Talking about whether or not this is jazz does a disservice to the music. Taken as a whole, this hour-long performance transcends definition, but within the confines of the structured forms is a freedom that allows for more than simple interpretation. It asks for both the performer and the listener to trust their instincts, and respond with a deeper emotional response.

While clearly intelligent, In Winds, In Light is not music to be intellectualized; instead it is music to be felt, to be experienced, and to be absorbed as a whole. Compelling, provocative and evocative, with In Winds, In Light Jormin asserts that music should not about technical prowess, rather it is about taking extraordinary ability and creating something deeply personal and spiritually moving.