By JACK BOWERS
April 2, 2013
Sign in to view read count
Suppose a month goes by, you have a column to publish, but nothing has happened that's worth writing about. What do you do then? Read on, as the question is about to be answered.

A while back there was a discussion at a Stan Kenton web site (Kentonia) about musicians or groups of musicians (more specifically, soprano saxophonists) playing out of tune, either occasionally or frequently. My response (entirely personal) was as follows:

"Well, there is obviously something wrong with my ears, and I suppose that's a blessing, as most of the soprano solos I've heard (on recordings) have, to me, sounded very much in tune. Logic tells me that if they weren't, some of the other musicians (or those who mixed, mastered, supervised, engineered and carried out other technical chores like that), who presumably have an ear for music, would have noticed and said, 'hey, that's out of tune; let's try it again'—or, 'let's use our space-age technology to correct it.' My brother Tom (a musician himself, amateur division) will say to me, 'He (or she) is playing out of tune.' 'Sounds fine to me,' I'll reply, and so it does. Then I think, 'Why didn't anyone else (besides my brother) notice that while they were recording? They are, after all, musicians, and should know when something is being played out of tune.' It doesn't make sense to me simply to release a recording on which someone is playing 'out of tune' because that is the path of least resistance. There are, after all, such things as multiple takes and, these days, even electronic correction.

"The occasions on which I've heard (perhaps I should say 'noticed') someone playing 'out of tune' have been extremely rare. That's not the same as being put off by the 'sound' of a saxophone (or clarinet, or any other instrument). Obviously, there are some who sound better than others (Zoot Sims, for example, was a master of every horn who sounded great on any and all of them). I wouldn't know about Kenny G; perhaps his playing out of tune would be an asset. But for most saxophone players it's a liability, and I can't imagine anyone wanting to do that, even accidentally. Saxophonists may miss a note here and there, but that's not the same as playing 'out of tune,' which implies they are doing it consistently. I've never quite understood the assertion that a professional musician, who has labored and studied to master his craft, likely has a good pair of ears, and must know when something is being played in tune (or not), would be playing out of tune while blithely unaware that he (or she) was doing so. Are musicians really unable to hear the difference? If so, how are they ever able to play music well? It seems to me that if they can't tell the difference between being in or out of tune we'd be left with cacophony, which isn't the case at all. Logic dictates that (most) musicians must know when they are playing the music correctly. Logic also tells me that most it not all of them do (an opinion reinforced by my admittedly average ears). Well, as I said, my ears may be deficient, but I do think that enables me to enjoy music more than others who may notice more (defects) than I do, and I like that trade-off."

That's how it looks from one non-musician's point of view. I may be completely off base, so please feel free to poke holes in the argument wherever warranted. I would, of course, expect you to back up your opinion with facts, which may prove difficult in this particular case, as "in tune" or "out of tune" can sometimes lie in the ear of the beholder. In other words, one listener's Jo Stafford may be another's Darlene Edwards. Again, speaking only for myself, I find it hard to believe that anyone on a recording who is playing even slightly out of tune (I'm referring here to jazz musicians, not rockers or their ilk) wouldn't want to try and get it right. It's just plain common sense.

And that, dear readers, is how to make a column out of nothing. I hope you've been taking notes.

Swingin' on a Riff

Toward the end of May, Betty and I plan to be in Los Angeles (at the Airport Marriott Hotel) for the Ken Poston / L.A. Jazz Institute's latest extravaganza, "Swingin' on a Riff: Big Band Masters of the Twenty-First Century," the dates for which are May 23-26. Four films, four panel discussions and no fewer than seventeen concerts in four days, more than enough to assuage anyone's appetite for big bands. There'll be plenty of big names too: Bill Holman, Don Menza, Bobby Shew, Tom Kubis, Bob Curnow, Mike Barone, Pete Christlieb, Roger Neumann, Gary Urwin, Bill Watrous, Kim Richmond, Steve Huffsteter, Alan Broadbent and many others. Obviously, the June edition of Big Band Report (the last after a fifteen-year run; more about that next month) will be devoted to coverage of what promises to be a spectacular event.

British trumpeter Derek Watkins, a star lead player in several big bands who also performed on the soundtracks of all twenty-three James Bond films, died of cancer March 22 at age sixty-eight. Fellow trumpeter Dizzy Gillespie once said of him, "When you speak of lead trumpets, Derek is 'Mr. Lead.'" Watkins started as a trumpeter in his father's dance band before turning professional at age seventeen. He was a member of the Ted Heath and John Dankworth bands before touring with Benny Goodman in 1969. He moved to Los Angeles in 1970 and spent four years as a first-call studio musician, meanwhile playing after hours at Donte's jazz club with the likes of drummer Louie Bellson and saxophonist Don Menza. He also played jazz with Gillespie, Count Basie and Oscar Peterson while accompanying performers such as Frank Sinatra, Barbra Streisand, Elton John and others, and opera singers including Kiri Te Kanawa, Placido Domingo and Jose Carreras. Besides the Bond films, he performed on Basic Instinct, Gladiator, Superman 1, Superman 2 and Bridget Jones's Diary. His trumpet solo opens the film Chicago. In association with Dr. Richard Smith, head of acoustics at Boosey and Hawkes, Watkins established a manufacturing company, Smith-Watkins Instruments, which manufactures and supplies trumpets and cornets to musicians. As a composer, he collaborated with Colin Sheen and James Talbot to provide incidental music for the long-running television show Midsomer Murders. Watkins was also a visiting professor of trumpet at the UK's Royal Academy of Music. 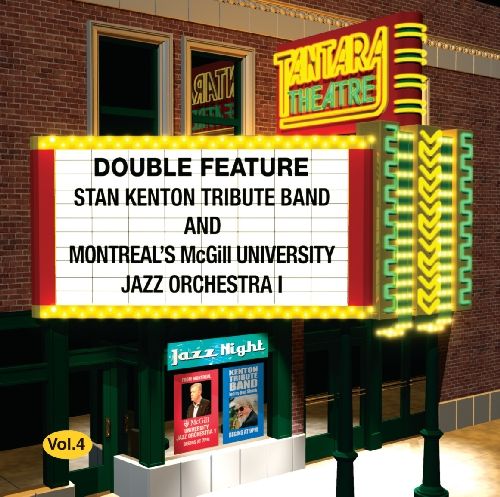 As the title denotes, this is the fourth in a series of double-CD packages produced by Bill Lichtenauer's Tantara Productions devoted to the music of Stan Kenton. It differs from the first three volumes, however, in that the Kenton Orchestra is not showcased on Disc 1. That space is taken instead by a Stan Kenton Tribute Band, taped for an audience in July 1993 at the Centrum Jazz Workshop in Port Townsend, WA, directed by the renowned saxophonist and Kenton alumnus Bud Shank. And what a band it was! With former Kenton stalwarts Shank and Greg Metcalf on alto sax, Bob Cooper and Bill Perkins on tenor, the incomparable Conte Candoli in the trumpet section, Jiggs Whigham playing lead trombone, and none other than Pete Rugolo and Bill Holman conducting their own compositions, it's like hopping into a time machine for the most enjoyable ride of your life. As icing on an already delectable cake, the great Bobby Shew plays lead trumpet, drummer Frank Capp pilots a blue-chip rhythm section (Kenton alum Dave Barduhn, piano; Doug Miller, bass), and the emcee is former Kenton trombonist Milt Bernhart who proves to be the perfect man for the job—erudite, amusing and with a marvelous voice to boot. Wonderful as they are, the real surprise—to the uninitiated—will be the impressive McGill University Jazz Orchestra 1, which confirms on Disc 2 that it is one of the outstanding undergraduate ensembles anywhere, capable of interpreting Kenton's music in a manner that certainly would have had the Tall Guy smiling and voicing his unreserved approval.

After opening with Kenton's swinging, seldom-heard arrangement of the traditional folk song "Arkansas Traveler" from 1941 and a chorus of his first sizable hit, "Eager Beaver," from two years later, Disc 1 embodies features for Cooper (Shorty Rogers' "Coop"), Candoli ("Pennies from Heaven"), Shew ("Maynard Ferguson"), Perkins ("Yesterdays") and Shank ("Stella by Starlight"), interspersed with Rugolo's "Collaboration" and "Machito," the memorable Kenton theme, "Artistry in Rhythm," and a pair of master works by Holman: "The Tall Guy" (whose playing time is nineteen minutes) and, as an encore, "Stompin' at the Savoy." Cooper's solo, as nimble and buoyant as ever, is especially heart-wrenching, as he succumbed to a heart attack less than two weeks after the session was recorded. I can honestly say that it brought tears to at least one listener's eyes. Candoli is resplendent on "Pennies," as are Shew (one of the few trumpeters who could pull that off) on Rogers' acrobatic "Maynard," Perkins on "Yesterdays" and Shank on "Stella." Barduhn, Candoli and Perkins (on soprano) share the limelight on "The Tall Guy" and again on the irrepressible "Savoy." "That concludes the dress rehearsal," Bernhart deadpans afterward. "The real concert starts in half an hour." Pardon the exclamation mark, but there's only one word that suitably describes the Kenton Tribute Band's "rehearsal": Wow!

Holman is prominent again on Disc 2, having written and arranged the first three numbers: "The Opening," "Tenor Piece" and "Cuba Jazz" (which should be heard more often). Rugolo is represented by "Artistry in Gillespie" and "Three Bop" along with his arrangements of Charlie Parker's "Yardbird Suite" and the standard "All the Things You Are," Bill Russo by his "Vignette," "An Esthete on Clark Street" and "Altonality" and arrangements of "It's the Talk of the Town" and "Autumn Leaves." Completing the program are Manny Albam's propulsive "Guane," Ken Hanna's galvanic "Durango" and Shorty Rogers' arrangement of the ballad "Smoke Gets in Your Eyes." Throughout, the McGill ensemble, astutely directed by Gordon Foote, remains uncommonly close to the spirit of Kenton, so much so that the over-all effect is astonishing, almost like hearing the Kenton Orchestra "reborn" in the hands of these remarkable young musicians. CD 2 opens, appropriately enough, with Holman's "The Opening," written for the second Festival of Modern American Jazz concert tour in 1954 and featuring spicy solos by trumpeter Andre Wickenheiser, tenor saxophonist Mike Bjella and alto Michael Johancsik. Bjella is showcased on Holman's "Tenor Piece" and solos with trumpeter Andy King and guest conguero Kiko Osario on the rhythmically and harmonically exciting "Cuba Jazz."