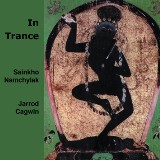 This album is well named. At the mundane level, its title derives from the fact that it was recorded live at the "In Trance" festival in Vienna, in October 2006. But it also contains music able to induce a trance like state, literally, to entrance. The music was inspired by, and is dedicated to, the great paintings of Dunhuang caves in Chin—and "inspired" is the word; Namchylak is on top form.

In recent years she has diversified away from the sound that initially brought her to the attention of the world, the sound based around her unique Tuvan overtone singing, with its eerie detachedness sounding like a woman possessed. This album has that overtone singing back at the heart of the music. It combines perfectly with Jarrod Cagwin's percussion to produce repetitive rhythmic pieces that frequently have a mantra-like quality, hence their entrancing qualities. During the less rhythmic passages, Cagwin deploys a range of effects that heighten the drama of Namchylak's (already dramatic) utterances, providing an ideal complement to the voice.

There are signs also of Namchylak's diversification; "Human Mother's Song" opens with Namchylak's soaring, wordless falsetto, a sound that seems to defy gravity and lifts the spirits. After a percussion interlude from Cagwin, Namchylak returns with her most demonic gravel-voiced growl, a sound that chills the soul. It is hard to believe one body can produce such contrasting sounds, heaven and hell in the space of seventeen minutes.

Finally, a word of praise for the recording quality which captures every nuance of both performers, putting the listener right in amongst them. Just another stunning aspect of a stunning album.

Darkness, tender wind, silence; Dance of an old spirit; Speaking to the emptiness of the universe; Human mother's song.