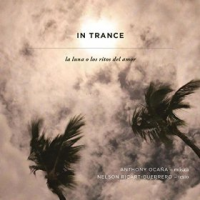 In order to fully appreciate Anthony Ocaña's intriguingly beautiful In Trance, which consists of six multi-level instrumental tracks (some with choral background) followed by a twenty-minute recitation of the poem "La luna o los ritos del amor," written by Nelson Ricart-Guerrero, it is necessary to understand the inspiration for both.

The music is inspired by the poem, and the poem's inspiration is described by its author:

"The poem "La luna o los ritos del amor / The moon or the rites of love" was first published by Cielonaranja, an editor established in Berlin, in 2005. Besides publishing books they have a website which is a virtual gallery on Dominican Literature.

It's inspired by an arawak (amerindians from the Caribbean and Amazonia) myth that takes place during the first Creation when the night was black as there was no moon.

Princess Guacaniona, daughter of a Cacique (king, Chief) and her lover, meet every night to make love in a passionate and lascivious way in complete darkness, aware of the other's body by senses and desire.

One evening, wanting to identify her lover, she puts coal dust on her palms and during intercourse she caresses her lovers face. The day after, as always, she woke up alone with the sunrise.

It was late when she got back to the settlement where the villagers had already begun the ceremony dedicated to the return of light, prayers, music, repetitive sounds leading to trance. Guacaniona gets into the circle of dancers, passes from arms to arms, from women to men until she dances with her brother Prince Guacatey and sees his coal spotted face.

She falls in trance, moves, screams and, Guacatey, not understanding what is going on, holds her in his arms and recognizes the scent of his night mistress.

He raises and says, "If we share the same blood and you are my woman at night we are then the legend." Saying so, he leaves the village and that night for the first time a full moon with black spots came out.

Guacaniona was pregnant and gave birth to a new world (2nd Creation), the island that became world (Quisqueya, the native name of the island of Hispaniola shared by Dominican Republic and Haïti means the Mother of all lands).

The story gave me the idea of writing an erotic poem on pure flesh love using as much as I could the Spanish Golden Age metrics (Calderón de la Barca) and making a link to Dominican 19th Century indigenist literature. That brought me to make researches on 17th Century Castillian Spanish spoken in the islands. I avoided the use of sexual words and instead worked on vocabulary issued from agriculture. The poem is constructed as a play much inspired on Greek tragedy with the presence of a narrator and voices (a chorus). The metrics and the words follow a rhythm. The last verse says, Boom Boom the tambours."

Now knowing this, the floating and ethereal overall mood of the instrumental tracks makes sense, as does the fact that they sound like an extended introduction, which of course they are. We are in mythological time, and, in the sense that myths reflect the collective memory of a people or civilization, what is remembered is truer than true. Many times, underlying the sensuous backgrounds of electronics, loops and processed voices are "native" rhythms, which help connect the mystical past with the present.

In front of all this, Ocaña plays a combination of lead and rhythm on acoustic finger-style guitar, and after swimming through the timeless mists of the first six tracks for more than thirty minutes, the stage has been set for the poem, beautifully narrated by Juan Olivares. Although automated translation is getting better, poetry, with its allusions and oblique language, makes it very difficult, if not impossible to achieve a true translation of mood and meaning. Nevertheless, what comes out from say, Chrome, gives a hint into the sensuous world of the poem's mythic inspiration.

Poetry has its own internal logic, and it is easy to get carried away purely by the rhythm of the words, even if one does not understand Spanish. Occasionally broken up by instrumental interludes, the poem rolls on, bringing us deeper and deeper inside its mythical time and place.

Allowing In Trance to work its magic makes for a very moving hour, even if it the poem's power is mostly subliminal for English listeners.