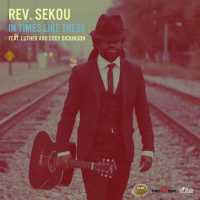 Throughout American history, southern black churches have been a source of reassurance and hope, and a respected safe haven for their congregation. Rev. Sekou (Reverend Osagyefo Uhuru Sekou) is a third generation Pentecostal-Holiness Church minister from Zent, Arkansas, who stepped out of the pulpit, taking his motivational message to the streets with In Times Like These. As critical civil rights issues continue to be in the national spotlight, Sekou draws on the functional intent of music to chronicle the frustrations of a mistreated population.

Produced and recorded at Zebra Ranch Studios, in Hernando, Mississippi, by Luther and Cody Dickinson, who appear on guitar and drums respectively, the record is an honest testament to the rural folkloric roots of black music. Coming from that familiar tradition where blues and gospel formed soul, Sekou sings with a passionate, rhythmic emotion, inherent of a life preaching and testifying to people who cannot be fooled, and expect the truth. And truth is what he delivers.

The opening expressions on "Resist," were taken from one of his activities at Ferguson, Missouri, at the height of racial unrest, where he was arrested and jailed for his role in organizing the protesters. It is a song of peaceful, yet determined, resistance, set to a marching tempo. The title track is an exclamation for action, the band accompaniment perfect, as the horn section and backing vocals provide a solid podium for Sekou's inspirational plea. He re-imagines Bob Marley's "Burnin' and Lootin," the hymned organ phrasing by Rev. Charles Hodges taking the song into a holy blues direction, far removed from the original reggae version.

"We Who Believe," is the familiar refrain from "Ella's Song," associated with the acapella group Sweet Honey In The Rock, though Sekou reworks the lyrics into a tougher, more strident narrative, determined by a woeful chain gang syncopation. Barking hound dogs chase the protagonist in the classic anthem "Lord I Am Running (99½ Won't Do)" Sekou joined by vocalist Raisa Sokolov for a unique depiction of anxious desperation set to music. This sense of agitated motion continues with a staggered dirge pace on "Muddy and Rough (Woyaya)" and the parading "Will To Win," which is encircled by distorted guitars and wailing vocals.

Sekou gives a blues twist to writer James Baldwin's essay "The Devil Finds Work," which critiqued the discriminatory portrayal of African-Americans in motion pictures. This interpretation opens with a power blues structure, then shifts into an energized spiritual revival with a prominent sacred steel guitar solo courtesy of AJ Ghent. Pure celebration and praise abound on "Old Time Religion," as Sekou takes it back home; and the walking bass line summons the Holy Ghost on a rocking version of the hymnal "When The Spirit Says Move." Bringing the pace way down, "Loving You Is Killing Me," reveals Sekou to be an accomplished soul singer, taking his time, letting pure sentiment carry him through the heartbreak and pain. An acoustical piano sets the mood on "Problems," as the electric lead guitar rises into a dramatic crescendo, the record coming to a finale.

After a life immersed in religion and civil rights activism, Rev. Sekou's musical ability and inclination naturally drew him into performing and recording, appreciating the opportunity of expanding his audience. In the liner notes, Sekou reflects on the role of the artist in battling the monsters we are confronted with, be they personal, political, or otherwise. With this recording he personifies what writer Amiri Baraka believed: "The artist's role is to raise the consciousness of the people. To make them understand life, the world and themselves more completely. That's how I see it. Otherwise, I don't know why you do it."

Track Listing: In Times Like These; Burnin’ and Lootin’; We Who Believe; Lord, I Am Running (99 ½ Won’t Do); Muddy and Rough; The Devil Finds Work; Old Time Religion; When The Spirit Says Move; Loving You Is Killing Me; Will To Win; Problems.