Bobby Hutcherson: In The Vanguard

By JIM SANTELLA
December 1, 1999
Sign in to view read count 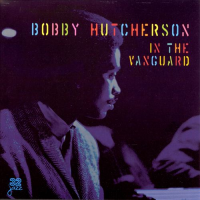 The reissue of Bobby Hutcherson's live Village Vanguard session from December 5-6, 1986 isn't the first. It's such a fine album that it's been issued quite a few times and has garnered high ratings. 32 Jazz has included Bob Blumenthal's original liner notes in which he lists several from the long list of jazz artists who've recorded live sessions at The Village Vanguard. Hutcherson's hard bop session features a lot of "blowing" by the leader on both marimba and vibes. His rhythm section on this date supports him well and provides an experienced conversation. Speaking of conversations, Fred Jung's interview with Hutcherson provides valuable insight into this session leader who got his start by laying bricks one summer in L.A. to save the money for his first set of vibes.

Moving freely between vibraphone and marimba throughout the session, Hutcherson fills the traditional front line role by himself. The rhythm section is a thrill from start to finish, but leaves most of the soloing to the leader. Barron shines on "I Wanna Stand Over There," a hard-driving hard bop vehicle. The quartet oozes rich harmony on the long slow ballad "Young And Foolish," while "Some Day My Prince Will Come" waltzes excitedly with all-around high spirit. Recommended, Hutcherson's session features a seasoned rhythm section along with his full-speed-ahead front line "blowing."

Little Niles; Estate; Well, You Needn't; Young and Foolish; Some Day my Prince Will Come; Witchcraft; I Wanna Stand Over There.