Mike Melito: In the Tradition 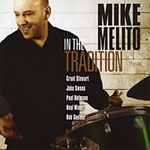 The last time I reviewed something from gifted drummer Mike Melito was in 2007, when he co-released All Through the Night (Indies Records), with guitarist Bob Sneider and bassist Phil Flanigan. Aside from the high quality of the music these guys are making up in Rochester, New York, what impressed me the most was the audible and contagious fun that the band was having. "A great ride," I said.

Well, he's done it again, since the same things can be said about In the Tradition, one of the best CDs to hit my mailbox all year. The music is bright, spirited and carefully chosen: four lesser-known tunes by Sonny Clark, Barry Harris, Hoagy Carmichael, Hank Mobley, Luis Eca, and Tadd Dameron, two classics (eloquent takes on Hoagy Carmichael's "Skylark," and Luis Eca's "The Dolphin"), and three fine originals. These include bassist Neal Miner's catchy, witty "Shades of Blue," written over the changes to "How Deep is the Ocean"; pianist Paul Hofmann's rolling title track; and trumpeter John Swana's playful "Le Barron," based on "Sweet Georgia Brown," where the group somehow manages a breakneck pace and a sense of relaxation at the same time.

Melito has assembled a first-class quintet where each player knows how to make a strong, personal statement without having to fill up all the available space. As he says, "you don't have to play a lot to say a lot." The band demonstrates this throughout, and Melito mixes up instrumental combinations, leads, and solos to keep things consistently interesting. In the Tradition is precisely that: excellent players addressing timeless, melodic material and swinging it like mad. This is Melito's fourth CD as leader, and his best yet; it's the kind of CD that justifies the "repeat" button on your stereo.