John Yao Quintet: In The Now

By DAN BILAWSKY
September 27, 2012
Sign in to view read count 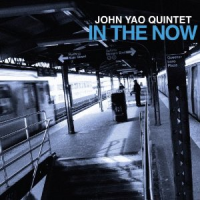 Freedom and streamlined focus don't often get along on jazz recordings, but when they do, it can make for an inspired outing. Trombonist John Yao managed to merge these divergent pathways into a single direction on his debut album, creating a flavorful feast for the senses. Yao's music is teeming with danger and uncertainty, yet it all seems to go down much smoother than a lot of material made with a similar recipe. This is due, in large part, to his understanding of aural tolerance and breaking points related to such matters. His music can be challenging for sure, but he never resorts to self-indulgent run-on runs.

Yao, a product of Chicago now living in New York, has an inside-outside take on the music that's built around kaleidoscopic shifts in structure, style and individual solo expressions. A mysterious, "Lonely Woman"-like séance may morph into a swinger ("Divisions") or a slow joint built atop a hip and grounding bass riff may suddenly be swept up into accelerando-driven madness ("Snafu"); Yao's "you never know what's next" philosophy keeps things interesting throughout.

Everybody keeps their eyes forward on the gentler material, like the waltzing "For NDJ," which contains a memorable solo from bassist Leon Boykins, and the soothing "Shorter Days," which features Yao's most lyrical playing at the outset, but they wander and go off on tangents elsewhere. Yao and saxophonist Jon Irabagon, of Mostly Other People Do the Killing fame, engage in polyphonic solo pursuits and individual excursions, while drummer William Clarke fills the spaces between band hits, bridging the gap between conversationalist and rhythmic guidepost, and pianist Randy Ingram shifts roles from colorist to soloist with ease and aplomb.

The leader's clean-toned, middleweight tone allows him enough strength to break through when a ruckus is taking place, but it also blends well with Irabagon in softer settings. Irabagon, who's often pegged as a puckish, avant-garde spinner of barbs, exhibits far more depth than most give him credit for. Doling out sweet lines and cutting remarks in equal measure, while nothing here matches his most left-leaning experiments, he proves to be the more far-reaching horn player on this date.

While Yao's journey is just beginning, In The Now is a solid first step that marks him as one to watch. This is compelling music that straddles down-the-middle modernism and the great beyond.