Stefano Battaglia Trio: In The Morning

By KARL ACKERMANN
August 10, 2015
Sign in to view read count 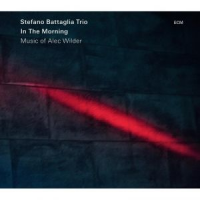 Over the past five years Stefano Battaglia could have easily taken bassist Salvatore Maiore and drummer Roberto Dani into the ubiquitous realm of classically trained piano trios, where improvisation, chamber and dark lyricism meet but rarely ignite. But along with his classical training and an established ear for free jazz, hard bop and mainstream, Battaglia has grown and capitalized on those collective skills. The Milan, Italy native has increasingly chosen an open mind and ear, an affinity for spontaneity, and an approach that has been additive over the years. His original ECM trio of bassist Giovanni Maier and percussionist Michele Rabbia Raccolto (2005) explored similar territories ten years ago, but the synergy of styles has grown more fluid and natural over time.

With the same excellent trio that produced The River of Anyder and Songways (ECM, 2011 and 2012), the combo returns with an enormously successful outing on In The Morning. The overarching theme is remote; a consideration of the work of the late American composer Alec Wilder who composed for jazz flavored pop, opera, film and was recorded by notables from Frank Sinatra to saxophonist Dave Liebman and Keith Jarrett. Though celebrated within the music community, and sufficiently recorded through his own projects and covers, Wilder, known in his time to be a somewhat domineering and disagreeable character, was not overtly recognized by the public music market.

Record live in Torino, Italy in April 2014 In The Morning reflects the eccentric combination of styles in which Wilder composed. The long title track (almost twelve minutes) opens with the type of lyrical Bill Evans style that Battaglia has been understandably fond of over the years. Maiore interjects a brief solo, Dani washes over the cymbals and Battaglia then picking up a more abstract variation of the main theme that effectively incorporates Wilder's pop experimentalism. Followed by another extended composition—"River Run"—the trio goes further out in pushing rhythmic and energetic performance, adding more color and texture.

Compositions like "Moon and Sand" and "When I Am Dead My Dearest" are given more poignant treatments with Maiore's deep, resonating bass anchoring the pieces and Dani moving them along with a more musical than pulsating approach. The lengthiest piece on the album, "The Lake Isle Of Innisfree" begins as a minimalist exercise and takes its time building up to more grounded and harmonic textures. The closer, "Chick Lorimer" is the most abstract song in the collection though it re-grounds and goes out in an uplifting manner.

The members of this trio have a strong understanding of each other and a seemingly transcendent connection that allows them to stray individually without losing context. Battaglia's traditional roots, both classical and jazz, are shared with his experimental nature and the results are always refined. In The Morning is the best of his trio recordings and a real pleasure to listen to.

Track Listing: In The Morning; River Run; Moon And Sand; When I Am Dead My Dearest; The Lake Isle Of Innisfree; Where Do You Go?; Chick Lorimer.