Dino Govoni: In the Library

By JACK BOWERS
December 1, 2002
Sign in to view read count 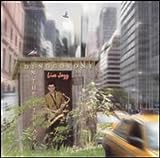 Young Boston-based saxophonist Dino Govoni, who has appeared as a sideman on a number of recent albums, steps forward to lead a talented quartet on In the Library, an earnest volume of engaging post-bop essays, most of them written by Govoni and his companions. The exceptions are Chick Corea’s melodious “Again and Again” and Suzanna Sifter’s volatile “Lines for Charlie.” Govoni’s supple, aggressive but always well-modulated tenor sax reminds me of another formidable young lion, Eric Alexander — high praise indeed, as Eric is a rising star whose reputation among Jazz fans and critics is thriving. Govoni seems equally at home on soprano, which he plays on “Again and Again” and “In the Library.” On either horn, he receives unflagging support from pianist Henry Hey, bassist Mike Pope and drummer Bob Kaufman who are intractably alert and in step. Hey and Pope frame a number of admirable solos while Kaufman unleashes his percussive arsenal on the fast-paced closer, “Are You Threatening Me?” Govoni composed that tune, as he did “Library,” “In Your Absence” and “All Things Must End at the Beginning.” Pope wrote the whimsical “Munk, Not Monk” and magnetic “Principle of Attraction,” Hey the prancing “Get Your Goat On.” Even though less than memorable, each of them is well above average and provides a sturdy springboard for improvisation, which is the basic ingredient in this liberal banquet. Odds are that this impressive performance by Govoni’s quartet won’t be widely heard beyond Boston and the greater New England area, but it should be.

In Your Absence, Get Your Goat On, Munk, not Monk, Again and Again, Lines for Charlie, All Things Must End at the Beginning, In the Library, The Principle of Attraction, Are You Threatening Me?