Orfeo 5: In The Green Castle

By GLENN ASTARITA
December 6, 2017
Sign in to view read count 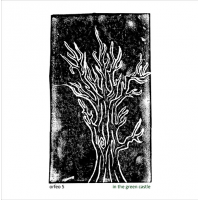 You never know what to expect from this UK-based record label, which is often a good thing. Otherwise, its website accurately delineates that Orfeo 5, "play what might best be described as improvised narrative landscape music, their pieces evolving over time to create a sense of place and journey."

It's an acoustic-electric set, largely nestled in the experimental domain. Occasionally the core trio —abetted by Shaun Blezard's insightful electronics manipulations—venture into hardboiled sojourns via stinging or raucous soundscapes and tumultuous solo spots. But "And Miles Away I Saw," is a piece that is based on a simple EFX-framed drum groove, tempered by Keith Jafrate's soft sax lines and Matthew Bourne's contrasting piano textures, leading to bizarre yet palpable developments. Toss in a few unexpected ditties that spawn chameleonic colors amid dabs of chamber-like patterns and you may find yourself morphing into a divergent stream of consciousness.

"A Prayer To The Sea," is rather eerie due to digitally altered voices and harrowing vocal choruses. On the other hand, I sensed what it may be like to encounter ghostly apparitions, perhaps during the midnight hour in a spooky forest. Moreover, the musicians add strange swooshing sounds and appear to be playing with darkness, countered by Jafrate's genial sax phrasings. However, Mary Oliver's operatic balladeering casts a strange and discordant epilogue. But variety is a key factor throughout. For example, "In A Flower's Radiance Part 2," features stammering and gravelly keys that ride above another slowly moving E-drum pulse, offset by Jafrate's cozy voicings. Here, the trio raises the pitch to project a rather unsettling vibe. No doubt, this is not background music, and even by experimental paradigms it may be considered off the charts; although these idiosyncratic components generate a source of interest on a per-track basis.