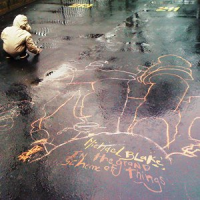 The beginning of an unusual release, "Road to Lusaka" is the first track from Canadian-born, New York-based saxophonist Michael Blake's In the Grand Scheme of Things. While maybe not as widely known in some circles, Blake is a masterful practitioner of the art form who is at ease working in or outside of the mainstream with a discography that includes a number of recordings and credits with the Lounge Lizards, the Jazz Composers Collective and others.

One of the key elements of the composition—and the entire release—is Chris Gestrin's exceptional work on both Fender Rhodes and Micromoog. The synthesized bass riff drives the piece, providing a wide sonic backdrop for the two lead voices to travel. At the track's closing, the Moog's frequency range is thoroughly manipulated with contoured embellishments. It's an electro-acoustic thoroughfare that is absorbing and enjoyable.