Christy Doran: In The Corner Of The Eye 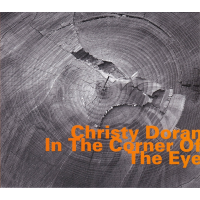 Celebrated Irish guitarist Christy Doran's penchant to keep reinventing his musical self is quite evident due to the disparate bands and solo projects he's undertaken for several decades. Whether imparting a jazz fusion spin on Jimi Hendrix with the band Call Me Helium Plays the Music of Jimi Hendrix (Double Moon, 2005) or experimental jazz and improvisational efforts with keyboardist John Wolf Brennan and other notables, Doran's hefty discography yields a kaleidoscopic perspective.

The program on In The Corner of the Eye contains ten pristinely recorded tracks of solo excursions and duets with distinguished progressive jazz and improvisational artists. It's a whirlwind ride, launched by Doran's frantic and sometime maddening acoustic guitar exposition "Solomutation," textured with delay devices via the momentum of a soaring spacecraft, and often sweetened with a few melodic intervals. But a change of seasons prevails on a per-track basis. For example, on "The Warm Up" he delves into a spunky free-bop exposition with trombonist Ray Anderson. Otherwise, the guitarist spins the Irish traditional piece "She Moved Through the Fair," into a Hendrix-like epic, complete with crunching distortion techniques and gut-wrenching single note leads.

Doran unites with reedman Marty Ehrlich on the airy "Celtic Ballad," then knocks it out of the park with Ehrlich amid a blues-boogie vamp on "Beyond Words." Surprises abound as the leader exuberantly displays his extremely broad music vernacular, including a hybrid Americana free-zone workout during "Lou Yuri." The guitarist closes the festivities with Swiss reedman Urs Leimgruber on "Spirale (edited version)." Here, the duo ventures into an avant-garde vista, complete with Leimgruber's sound-shaping mechanics, performed on soprano sax and heightened by the leader's wily EFX treatments that basically accentuate the bizarre progressions. Hence, Doran sets his sights upon diverse trajectories with changeable patterns, diffuse song-forms and deeply personalized takes on jazz and other genres, embedded into the core improvisational foundation that underscores this exhilarating set.

Solomutation; The Warm Up; She Moved Through the Fair; Seven Shadows; Switches, no Cuts; Celtic Ballad; In the Corner of the Eye; Beyond Words; Lou Yuri; Spirale (edited version)