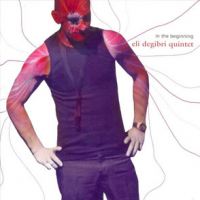 Israeli-born tenor saxophonist Eli Degibri, who not too long ago cut his teeth playing with Herbie Hancock, has taken his own maiden voyage with his premiere CD release, the appropriately titled In the Beginning. Degibri composed most of the songs here, narratives defined by deft rhythm and tempo shifts and ample space for the musicians to express themselves.

Appropriately, the title cut leads things off, a tune imbued with the anticipatory, exciting feeling of something—a life form, a musical style—slowly evolving. The spiraling head is highlighted by pianist Aaron Goldberg hammering out single notes over drummer Jeff Ballard's ride cymbal peals, with the guitar of Kurt Rosenwinkel gurgling in the background like a prick of the conscience. All of this leads to Degibri's solo, initially measured, then growing in passion and complexity punctuated by cyclonic riffs. "Painless" is a ballad with the attitude of a lament, with slow, soulful blowing by Degibri straight from the Kenny Garrett house of style, accompanied by gentle plucked highlights by bassist Ben Street. Rosenwinkel puts down Metheny-caliber licks on the guitar with lightning-quick riffs within each chord, leading to a conclusion that evaporates like the remnants of a dream.

"Shoohoo," a kindred spirit to Mingus' "Fables of Faubus," starts with a faux military march, with Degibri and Rosenwinkel trading call and response at the head and Ballard drumming outside the box. The rhythm section paves the way for another spiraling improv by Degibri that soars to the sky, then returns to Earth with a sudden halt. "Song For Roni" is an earthy, bluesy ballad that opens with Ballard's cymbal highlights, then shifts into a waltz, with more great playing by Rosenwinkel. "With You" has a samba sensibility (although why this song is divided into two parts when there is no discernible difference in rhythm or tempo is a mystery), and "Fin" begins with a whisper but expands to a shout, with the band taking out song and disc behind Degibri's repetition of the three-note figure of the theme.

Degibri has fun with the pair of standards he includes. He plays "Cherokee" solo, heading for the upper register from jump, stripping it down to a barely recognizable essence, revealing its true identity only at the end and finishing it off with a harmonic flourish. "All the Things You Are" is a tender duet between Degibri and Street, played at the leisurely tempo of someone reminiscing about an old friend or lover, perhaps with the sadness of lost or unrequited love.