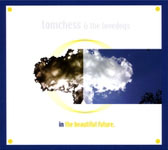 Multi-instrumentalist and composer Tom Chess is an extraordinary musician who has traveled the world to study and perform with the best and brightest. He's also an accomplished jazz guitarist, having spent quality time with tenor saxophonists like Dewey Redman and Pharaoh Sanders. Residing in New York City, this band in particular was formed in 1999 for its band-members to culminate and integrate musical experiences into a medium that bespeaks worldly connotations.

Chess formulates a hybrid, world-music/jazz state of affairs on this two-disc set. With trumpeter Alicia Rau, bassist Nathan Peck and two percussionists, the band morphs North African and East Indian modalities into a forum for jazz-tinted improvisation. On the opener, titled "Oud taksim on: 19 times in 17 years, Chess' solo oud extrapolations paint a rather solitary milieu. But the quartet subsequently ups the ante on works designed with a buoyant frontline attack, accelerated by sinuous time signatures via linearly designed unison phrasings.

The band alters the velocity in spots as the percussionists lay out a fertile groundwork for the soloists. Besides using loops and an mbira (thumb piano), Chess' mystical flute patterns generate a rather blissful aura during "In the Beautiful Future. Then, on "Aletheia, they conjure up notions of a Morrocan marketplace, enamored by indigenous rhythmic instruments and Chess' alluring flute lines.

Music therapy is a hot topic these days; therefore, Chess' ensemble would seemingly fit snugly into those parameters. Here, the power of music offers a boost to one's spiritual health, which is an insinuating notion that parallels the highly entertaining groove-focused aspects of this largely euphoric encounter.