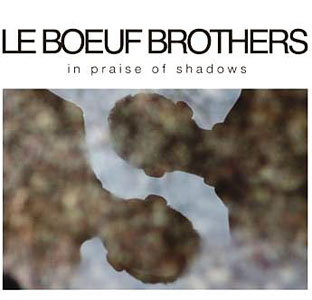 Projects such as the Le Boeuf Brothers' In Praise of Shadows should help quiet the debate on whether or not jazz is stagnating. The twins—keyboardist Pascal and saxophonist/clarinetist Remy—are talented musicians and award-winning composers who are a part of the new breed of young artists, like trumpeter Ambrose Akinmusire, pianist John Escreet and bassist Esperanza Spalding, who channel their influences, environments, and resources into works that reflect their own identities.

As in their self-released 2009 debut, House Without A Door , the twins enlist the help of equally commanding peers such as the increasingly visible bassist Linda May Han Oh, drummer Henry Cole, and newer voices such as saxophonist Mike Ruby. The eleven tracks show the brother's proclivity for sumptuous melodicism and well thought-out compositions.

This continues to hold true with In Praise of Shadows , but with a few added surprises, the first of which includes the added layering of electronics on the opening "Fire Dancing Dreams." Its acoustic-electronic blend is organic, mixing hip rhythms, processing and strong performances before it morphs into the exotic "Everything You Love," which includes Pascal's persuasive singing and an ethereal string arrangement from the Myth String Quartet.

All of the musicians are highly trained in a number of disciplines but the feel of the music is not restricted to any one idiom. There are intersecting lines of electronica and rock in "D2D," with a trippy solo from guitarist Nir Felder; ambient soundscapes in "Calgary Clouds"; and tense drama in "Circles," as Remy's alto exchanges lines with the MSQ's undulating strings. The compositional methods reveal the brothers' inquisitiveness and exhaustive attention to detail. One of the most emotive tracks is "For Every Kiss," a tune that features vocals and production in the vein of eclectic singer/songwriter Sufjan Stevens. It could top the charts like a hit pop tune, with the unusual exception of its lengthy, stirring saxophone solo and elaborate electronic coda.

The title piece doesn't settle the matter of where the twin's allegiance lies, and that's a good thing. It's a bright piece of modern jazz with hints of chamber and mountain folk music. Like its predecessors, the music is open-minded and masterfully crafted; a fascinating view and a precursor of things to come from the intriguing Le Boeuf Brothers.

Fire Dancing Dreams; Everything You Love; Two Worlds; D2D; Calgary Clouds; Circles; We Thought They Were Planets...; Red Velvet; The Last Time You Were Happy; For Every Kiss; In Praise of Shadows.