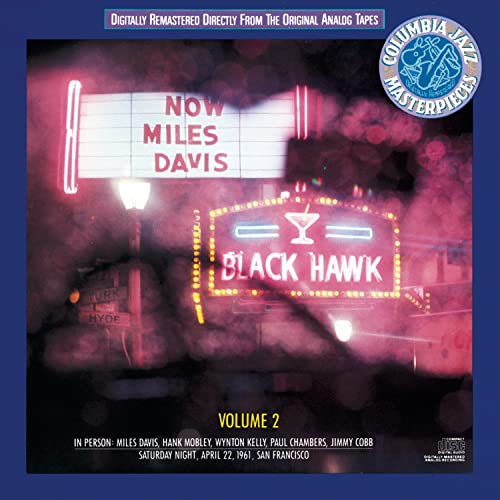 The four sets that grace this 2-CD volume were recorded on April 22, 1961 in San Francisco. Miles Davis was in his prime, and his rhythm section knew the tunes well. Each of the sets appears here in its original performance order. Since nine of the tracks have never been issued before, this 24-bit Super Bit Mapping reissue carries a special significance.

The Miles Davis quintet was in such fine form that night that it makes you pause to ask, “Why weren’t these particular tracks issued before?”

The ensemble swings hard and fast on “Walkin’,” but Davis may have been dissatisfied with his tone on that number. Who’s to say? He lays out for “Softly As In a Morning Sunrise.” Paul Chambers moves off pitch and out of tune through parts of “I Thought About You.” Maybe a few of the selections contained too much of a classical nature in parts. But these subjective thoughts should not interfere. The band is pumped and everyone turns in a great performance. Maybe there simply wasn’t room on the LP. This time out, the complete performance has plenty of room. Excluding breaks, the performance runs over two hours. Each set, give or take, goes for about a half hour.

”Neo” on Saturday night is as exotic as it was on Friday night. “Autumn Leaves” and “Someday My Prince Will Come,” on the other hand, show up only on Saturday night. The last six tracks listed are issued here for the first time. Each represents the quintet in its prime, exploring the music and creating new avenues for expressing the pleasures of straight-ahead jazz.

If I Were a Bell; So What; No Blues; On Green Dolphin Street; Walkin