Ted Curson: In Paris: Live at the Sunside 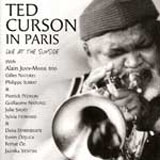 Ted Curson is still very active as a trumpeter and flugelhornist in his seventies, when most players formerly had to give up the instrument for health reasons. Surrounding himself with a strong, young band made up of enthusiastic French musicians, plus several vocalists, Curson's two-CD set compiles highlights from a pair of nights at the Sunside in Paris.

Like Dizzy Gillespie, Curson's intonation and power aren't what they were as a younger man, but his solos are still full of risk-taking moments. The obvious highlights of the first disc are the instrumentals, including smoldering up-tempo interpretations of "Caravan and "Dig, a swaggering "Woody 'n You (featuring the leader's spirited flugelhorn), plus a strutting "Cantaloupe Island, that showcases pianist Alain Jean-Marie and adds conga player Julie Saury. The vocal numbers are a bit uneven by comparison. Curson's "Tears For Dolphy (written in 1964) now features a heartfelt lyric, but the singers backing vocalist Janika Ventsel prove distracting. The trumpeter's vocals on the moving "'Round Midnight and a warm "Georgia On My Mind are sincere, mixing nostalgia with just a touch of humor. But his bluesy vocal of "Piima Boogie (evidently a popular brand of buttermilk) is strictly for laughs.

The second disc is a bit more consistent, starting with the rollicking "Reava's Waltz, a piece Curson named in honor of his mother but actually penned with Charles Mingus in mind (a favorite of Curson's mother). Saury returns on congas for a slinky interpretation of "Tin Tin Deo that also adds Guilaume Naturel on flute, while Curson sounds reminiscent of Gillespie late in his career. The band's blistering takes of "Confirmation and "Milestones work well, though Curson's decision to sing lead in "Lover Man (a woman's song if there ever was one) is rather odd, while "Cherokee benefits from Curson's lively scat and lead vocals.