By MATTHEW WARNOCK
September 14, 2010
Sign in to view read count 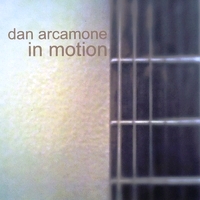 In Motion is a burning modern jazz album from Connecticut-based guitarist/pedagogue Dan Arcamone. This highly original record, with a slight tip of the hat to guitar virtuoso Tim Miller, is a solid follow-up to Arcamone's self produced debut, 2008's Trioism. Joined by his working trio of bassist Rich Zurkowski and drummer Tom Ash, along with some special guests, Arcamone has once again proved why he is one of the bright young stars on the East Coast modern jazz scene.

All of the compositions were written and arranged by the multi-talented guitarist. Arcamone's writing style is reflective of the time he has spent studying and performing in the modern jazz realm. The harmonic movement is more free-flowing than the standard jazz repertoire and, though there are plenty of modal and vamp-based sections during these tunes, the album never becomes monotonous or overdone. With a strong rhythm section, and the ability to explore myriad rhythmic possibilities within the context of his writing, Arcamone and company take even the simplest harmony and make it interesting and engaging. This is a testament to the level of creativity and musical ingenuity possessed by these world class musicians.

As a guitarist, Arcamone is that rare breed of musician who has incredible chops, but also the restraint to know when to use them and when to lay back and focus on a melodic line or harmonic texture. "Tides" and "Open Sky" are great examples of his technical facility; far from running lines or finger patterns across the neck, Arcamone uses his chops to create energy, draw in the rhythm section, and take the music to the next level of excitement. On the other end of the spectrum, "Distance" showcases the guitarist's ability to sit back in the pocket and lay down simple, yet highly effective chord voicings behind Small's sax solo. This diversity is one of the reasons that Arcamone is such a strong player, and why the album is successful as a whole. Without its range of textures, rhythms and levels of intensity, In Motion could easily have been just another blowing album, a showcase for each player's chops. Instead, it is a well-composed and engaging musical journey through the creative minds of these six talented musicians.

In Motion is a strong sophomore effort: the music well-written and creatively arranged; the playing world class; and each successive piece bringing a new level of intrigue, interest and excitement.