Eric Revis Quartet: In Memory Of Things Yet Seen

By GLENN ASTARITA
April 25, 2014
Sign in to view read count
Track review of "The Shadow World" 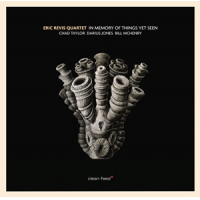 Revis introduces Sun Ra's "The Shadow World" with a complex bass passage that also triggers a degree of anticipation of how the piece will develop. Hence, the saxophonists enter into the picture with compact unison phrasings, elevating the festivities to a soul-stirring pitch and leaving space in between choruses atop Chad Taylor's blustery drumming. Hence, a torrential downpour ensues, and a sense of urgency takes center stage via the soloists spiraling discourses amid seething crescendos. Moreover, the rhythm section operates at a feverish pace, leading to a red-hot apogee. Ultimately, Revis skillfully aligns prominent artistic values into a contrasting set of compositions, perhaps highlighting his worldly experiences as a consummate jazz musician whose visionary outlook comes to fruition once again.