Eri Yamamoto: In Each Day, Something Good 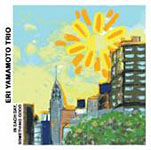 For her third outing under the Aum Fidelity banner, Japanese pianist Eri Yamamoto is back in the company of her long time trio featuring bassist Dave Ambrosio and drummer Ikuo Takeuchi. This is their sixth release together; not bad going for someone who had never played jazz before her 1995 visit to New York City, when first inspired to switch from classical upon hearing the great Tommy Flanagan doing his stuff. Though Yamamoto has found a niche at the free end of the downtown scene, working with William Parker, Daniel Carter and Whit Dickey and making a telling contribution to one of the stand out sets at the 2009 Vision Festival, this session, like Redwoods (Aum Fidelity, 2008), sits firmly in the modern mainstream.

Foreground slots for Ambrosio's blithely melodic bass are sprinkled throughout the disc, particularly captivating on "Blue in Tunisia" and the understated grandeur of "Sheep Song." A dexterously propulsive presence throughout, Takeuchi takes his turn in the spotlight on the sprightly dancing "I Was Born" with a stuttering solo which develops naturally from Yamamoto's insistent dynamic swells. A charming simplicity characterizes many of the themes. From the lilting minor key "Attraction of the Moon" with its melody shyly peering out from the behind the emphatic pulse to the dainty stepping piano and bass motif of "A Little Escape," the trio lays out an abundantly nuanced spread, promising prolonged sustenance. True to its name "We'll Figure Out Blues" overlays a bluesy swing over a lightly clip clopping Latin motion, while "Blue in Tunisia" bespeaks a slightly mysteriously desolate air contrasting with the delicate group interplay. All told it's a delightful set readily consolidating Yamamoto's place at the top table.

Attraction of the Moon; Secret Link; Every Day; We'll Figure Out Blues; Blue in Tunisia; I Was Born; A Little Suspicious; Let's Eat, Then Everything Will Be OK; A Little Escape; Sheep Song.