Polar Bear: In Each And Every One 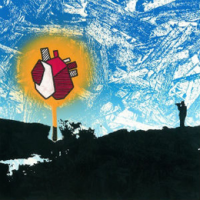 Polar Bear is back. Not just with a bang, but with a whole array of other sounds, including the occasional whimper. In Each And Every One brings together 11 tunes from the pen of drummer Sebastian Rochford—from the gently bucolic to the downright macabre. There's also an early front runner for the Best Song Title Of 2014 award.

In Each And Every One is the British band's fifth album. It appears four years after Peepers (Leaf Label, 2010) and ten years into a career that's included the Mercury Music Prize nominated Held On The Tips Of Fingers (Babel Label, 2005). The four year gap between releases hasn't exactly been filled with thumb twiddling and idle reflection. Rochford has worked with a host of musicians including Brian Eno and Jason Moran. Saxophonist Pete Wareham and electronics maestro Leafcutter John have enlivened the scene with Melt Yourself Down. Saxophonist Mark Lockheart produced the excellent Ellington In Anticipation (Subtone Records, 2012)—which featured Rochford and bassist Tom Herbert. Herbert also plays bass with another Mercury nominated band, The Invisible.

The 2014 Polar Bear has lost none of its creative spark. Starting with Rochford's compositions, the band takes off in all sorts of directions. Leafcutter John's electronics are at the heart of much of this music, whether creating the dreamlike soundscape of "Open See" or the darker moods of "WW."

Whatever the mood, whatever the tempo, there's a beautifully unforced feel to this music. Rochford's percussion, often underpinned by Leafcutter John's electronic beats, is key to this sense of relaxed cool. Wareham and/or Lockheart sound similarly unhurried much of the time—on the quirky "Be Free" for example—although they occasionally break into more frenetic flurries of sound.

And the early favorite for Song Title Of The Year? "They're All Ks And Qs Lucien" takes that accolade. Blessed with a fine groove and some of Rochford's most imaginative percussion, it builds slowly to what appears to be a rousing finale before re-emerging with a somewhat mystifying coda. High drama. Indeed, there's excitement in all of these tunes, there's drama In Each And Every One.

Title: In Each And Every One | Year Released: 2014 | Record Label: The Leaf Label