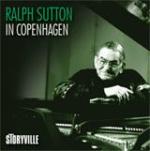 Ralph Sutton, "The Last of the Whorehouse Piano Players," was 54 and in peak form when these tracks were recorded over three days during a visit to the Danish capital in 1977. It is difficult to imagine Sutton, as a boy, playing organ at the Presbyterian church in Howell, Missouri, where he grew up. From the age of nine when he first heard Fats Waller, his great love was stride piano. He modeled his style on Waller, James P. Johnson and Willie "The Lion" Smith, though he was also a great admirer of both Earl Hines and Teddy Wilson, rooted more in the "swing" tradition.

At the age of 19 he was studying to be an osteopath when he was discovered by trombonist Jack Teagarden, who happened to be passing through Howell. After playing in Teagarden's big band from 1941-42, Sutton was drafted into the army, where one of his assignments was to play glockenspiel in the 104th Infantry Band in the Mojave Desert. After the war, he really did play in a whorehouse—in the red light district of East Saint Louis, Illinois. Then he worked with musicians from the Eddie Condon mob, including Wild Bill Davison on trumpet, with whom he was reunited for this album.

Sutton plays two solos—Bix Beiderbecke's lovely ballad "In The Dark" and his own liltingly enigmatic "Worrying The Life Out Of Me." He really stretches out on "I Want To Be Happy" and on a stunning version of Handy's "St. Louis Blues." His affectionate interpretation of James P. Johnson's "Old Fashioned Love" is an interesting inclusion.

On six tracks, Sutton is joined by Danish musicians Lars Blach, guitar, Hugo Rasmussen, bass and Svend-Erik Nørregård, drums. Nørregård drops out on four other numbers and "Old Fashioned Love" is played by just Sutton and Rasmussen. Wild Bill, who was 71 at the time and no longer hitting the high notes like he did in his youth, plays on the closing five very "traddy" numbers, on three of them with saxophonist Jesper Thilo and Ole "Fessor" Lindgren, trombone. They illustrate the sort of thing Sutton had to do to earn a living later in life.

This is not to do down the locals. A rollicking version of "You're Driving Me Crazy" features an excellent solo from Rasmussen. Blach, in his understated way, is particularly good on "I Want To Be Happy" and contributes nice solos too on "You Can Depend On Me," "At Sundown" and "Jeepers Creepers."

Ralph Sutton, "Last of the Whorehouse Players," died in Evergreen, Colorado, in 2001 at the age of 79. In Copenhagen is a fitting memorial.

Thou Swell; You're Driving Me Crazy; You Can Depend On Me; At Sundown; Undecided; In The Dark; Jeepers Creepers; Gone With The Wind; I Want To Be Happy; If I Could Be With You; St. Louis Blues; Worrying The Life Out Of Me; Old Fashioned Love; Everybody Loves My Baby; Blue Room; Shine; Running Wild; Exactly Like You.