By HRAYR ATTARIAN
August 19, 2014
Sign in to view read count 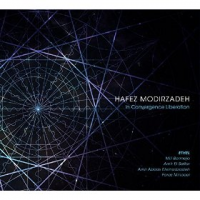 Multi-instrumentalist, composer and ethnomusicologist Hafez Modirzadeh's In Convergence Liberation on the intrepid Pi Recordings label is an ambitious work, and one at which he admirably succeeds. The album is a single, unified entity made up of five distinct but interlaced suites that explore a primal spirituality and express it in timeless poetry.

Deftly merging Iberian song, eastern (primarily Persian) and western classical heritages and a hefty dose of improvisation Modirzadeh creates a contemplative transcultural musical epic. As he delves into universal themes he pays homage to lesser-known, fascinating women and through them to the concept of the feminine in its abstract form.

The six-movement "Sor Juana" is dedicated to the Mexican nun, author and scholar Juana Inez de la Cruz, who passed away in 1695. An early feminist icon she criticized the male dominance of academia. The multi-textured, absorbing piece opens with Bermejo's ethereal chanting surges over santurist Faraz Minooei's shimmering mallet strikes. Modirzadeh's resonant, alto clarinet echoes with dramatic flair and adds a contemplative edge. Trumpeter Amir ElSaffar's poignant, brief spontaneous lines contribute a subtle angularity and usher in Minooei's mesmerizing, acerbic solo. ElSaffar's Iraqi maqam style singing supports and complements Bermejo's mournful articulation of the lyrics over a tense backdrop of ETHEL's stimulating drone. Switching to tenor saxophone Modirzadeh veers west with his yearning extemporization that evolves from Spanish tinged to boldly "jazzy." His unfettered duet with ElSaffar flirts delightfully with atonality before it melts into the distinctly middle-eastern flavored conclusion with Etemadzadeh's daf (a type of tambourine) driving the music to a memorable and languid end.

Violinists Mary Rowell and Cornelius Dufallo, violist Ralph Farris and cellist Dorothy Lawson make up the quartet ETHEL and their seamless camaraderie allows them to function as a single chordophone to breathtakingly exciting effect. Their skills as individuals and as a unit are best appreciated on the distinctly European "Suite Compost." The mood ranges from the melancholic with wailing violins and Lawson's poignantly alternating plucked and bowed strings to the angst ridden. The furious climax of dissonant, energetic exchanges melts into the coda's dramatic nostalgia.

With this impressive album Modirzadeh has fused his remarkable scholarship with his superb artistry. The result is uniquely cerebral without being abstruse and sublimely visceral without veering into melodrama. In short it is a near perfect disc that is quite accessible as well as exquisitely thought provoking, exactly what one has come to expect from both Modirzadeh and Pi Recordings.