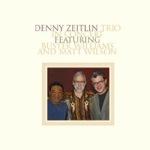 The art of the trio—piano, bass and drums—is an especially challenging prospect when considering that all three instruments play an essentially rhythmic role in almost any form of music. Thus, utilizing the harmonic extent of those instruments precludes extraordinary understanding of the finite possibilities of each with a view to extending these into the realm of the infinite. To bend and manipulate frequency responses of piano, bass and drums, and to extract and create melodic and harmonic invention requires consummate skill. And then of course there is the invisible chemistry of the players themselves—the vibrations, for those preferring the renaissance term—that could stand between a meaningless interaction, or a shared epiphany between a trio of musical souls.

There can be no doubt that this trio—Denny Zeitlin on piano, with Buster Williams on bass and Matt Wilson on drums—has everything it takes to leave its mark in the rarified earth of creativity. In Concert leaves a lasting impression of being the release that will create a new definition for the art of the trio on many levels. Partnership is just one of them, and here, Zeitlin, Williams and Wilson demonstrate a telepathic feel for where each is going with a song and its ideas throughout the record. This is why Zeitlin's trio manages so memorably to take apart and make totally new Coltrane's tribute to Paul Chambers, "Mr. P.C." This is true from the song's racing, original up-tempo chorus to the magnificent dissertation of Zeitlin's fast-to-mid-to-12-bar blues solo through the interpolation, with Williams' growling bass and the rambunctious rat-a-tat and steady tic-a-tic-a-tic of Wilson's drums.

Next comes an even bigger bang with the intriguing crepuscular nocturne, "The Night Has 1000 Eyes/1000 Eyes," which does to the second half of the song what Zeitlin did in the earlier revamp of Coltrane's standard. So how can the symbiosis of the trio be any different on "Prime Times," on the eerily brilliant "All Of You," or indeed on the intriguing "The We Of Us"? Not likely. Zeitlin, Williams and Wilson show on this record that when frequencies swirl in time and space—from absolute mastery of the hammered strings of the piano, the seeming timelessness of the pizzicato excursions of William's bass (especially on the giant Mingus-like "Bass Prelude") and the omnipresent melodics of Wilson's drums—then the art of the trio can be said to have truly been redefined.