Dick Hyman: In Concert at the Old Mill Inn 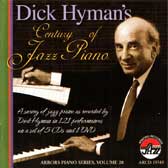 During his lengthy professional career, pianist Dick Hyman has been a first-call studio player for many kinds of music, in addition to being able to play any style in the history of jazz. As well as being a sideman with Benny Goodman, Hyman worked in a duo with the late cornetist Ruby Braff, played pipe, Hammond and theater organs, along with taking part leading various size jazz ensembles and creating soundtracks for several Woody Allen films. But Hyman's greatest strength is in a solo piano setting, where his imagination and considerable chops are best displayed.

This 2007 solo performance at the Old Mill Inn in Toronto is a typical outing, a mix of standards, time-tested jazz compositions, originals and even modern pop. No matter how many times standards have been recorded, Hyman manages to find fresh paths, with intricate improvisations that never get carried away, such as in the rhapsodic treatment of "I Can't Get Started." In "Stompin' at the Savoy" the pianist incorporates a hip bass line reminiscent of the one he used in his interpretation of Fats Waller's "Bond Street" while his lightly swinging setting of "All the Things You Are" has its share of Art Tatum-like runs.

The pianist includes two original miniatures, both previously recorded in the studio for Dick Hyman's Century of Jazz Piano (recently reissued by Arbors). The relaxing "Ocean Languor" is a reflective ballad with flashes of Bix Beiderbecke's works for piano, while "Pass It Along" is imbued with the stamp of Swing Era great Teddy Wilson, with whom Hyman studied in his youth after winning lessons in a contest. Perhaps the most surprising track is Hyman's arrangement of the Beatles' "Blackbird," which he transforms from a quiet ballad into a breezy swing vehicle.

Ain't Misbehavin'; I Can't Get Started; Stompin' at the Savoy; Have a Heart; Honeysuckle Rose; All the Things You Are; Undecided; Blackbird; Christopher Columbus; Ocean Languor; Pass It Along; The Man I Love.