By DOUG COLLETTE
December 14, 2011
Sign in to view read count 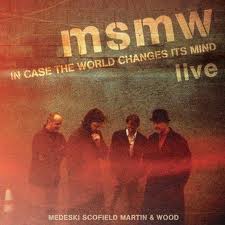 In Case the World Changes Its Mind reaffirms the chemistry at the heart of the collaboration between nouveau-jazz trio Medeski Martin & Wood and guitarist extraordinaire, John Scofield. Hearing this live recording reveals the delicate, almost precarious, balance of factors that put them finely in tune with each other.

Recorded on the 2006 tour to promote the foursome's studio outing Out Louder (Indirecto, 2006), the concert piece demonstrates how the four-man unit functions with judicious serendipity when playing together. Improvisations like that found within the set's title song are a microcosm of the quartet's collective search for new ideas. On his sinuous entry, Scofield leads by actively but patiently searching out palpable threads of melody, gradually joined by the keyboardist John Medeski on electric piano, while the rhythm section of bassist Chris Wood and drummer Billy Martin embroider the pulse at the heart of the song itself.

The flow of "Tootie Ma Is A Big Fine Thing" develops in a similar manner. The bass intervals and drums segments expand the continuity of those moments when all four are in action during this almost thirteen-minute track. Likewise, Wood's "Cachaca," in the context of the sequence of a dozen cuts here (as mixed and edited by renaissance man Jamie Saft) links the track with this set's title tune. And while this self-composed piece isn't all that different, the syncopation is sharper on Scofield's "A Go Go," the beat component more prevalent in its combination with the chord progression. "Miles Behind" is also an action demonstration of how Scofield and MMW's respective styles mesh.

MSMW takes almost as much time on "Hottentot" from A Go Go (PolyGram, 1997) as it does the blues-derived "Little Walter Rides Again," yet another example of the way the trio has no fear venturing into realms it usually does not visit on its own. Whether the impact first hits the head or the body, the sound moves indiscernibly in and out of sweet, comforting tones to jagged and imperious sounds, then back again. Because MMW's own soundman David Kent so carefully recorded the performances, it's possible to pick out each instrument in the mix at any given time.

Likewise, on the red-orange cover art whichever way the complementary design is folded , it's always possible to discern the individual and group images as they merge in and out of each other. And because the color scheme and design is intrinsically pleasing to the eye, perusing it is much the same as hearing MSMW, where it's a pleasure to figure out what's going on.