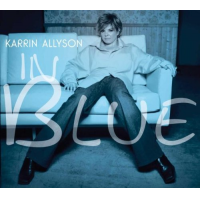 How Does One follow-up Ballads?... With the Blues

As one would expect, Ballads is a bit of a hard act to follow. It was a perfectly conceived and executed recording. In Blue stops just short of Ballads in the perfection category, but nevertheless is heads and shoulders above the rest in the area of jazz vocals. Ms. Allyson surrounds this concept album with a Wynton Marsalis investigation of the blues. That is to say that the tunes do not necessarily conform to the 12-bar, 9-bar, minor-key, blues with a bridge format. Ms. Allyson is careful not to define this as a blues recording, but rather ..."collection of tunes I love, that have to do with having the blues—no matter the form."

Ms. Allyson kicks things off with Bobby Timmon's "Moanin.'" That her voice is sexy is an understatement. Ms. Allyson's voice might be likened to a smoky Merlot. It is neither as expansive as a Cabernet nor as sweet as a Shiraz, but it is red-lipped insinuating and powerfully sensual. She means business. She modifies the Jon Hendricks vocalese vision, distilling Timmons's tune its bare essentials. The piece really kicks in with the Steve Wilson solo followed by Ms. Allyson's trademark unison scat. "Everybody's Cryin' Mercy" continues in the same vein as "Moanin,'" testifying in its own gospel infused way. "Evil Gal Blues" and "Love Me Like a Man" are 12-bar offerings, the latter displaying some dirty Danny Embry guitar playing. Joni Mitchell's "Blue Motel Room" echoes Rickie Lee Jones, as well as Mitchell, in Ms. Allyson's unique delivery and "Angel Eyes" haunts as Ms. Allyson's pungent delivery telegraphs covert resignation.

ADVERTISEMENT
In Blue, like Ballads, is one of those recordings that illustrates that while most music is good and worth listening to, that some music is so vastly superior as to redefine the aesthetic scale used for comparing recordings. In this case, this is largely because of Ms. Allyson's abundant talent and musicality. Cryin' Mercy, indeed!