Sofia Pettersson: In Another World 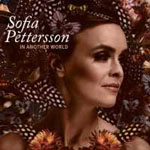 Since the success of Norah Jones, who was initially marketed as a jazz singer which she manifestly isn't, record companies have been falling over themselves in their efforts to repeat the trick. Nowhere more so than in Sweden, with the dark-haired, blue-eyed Sofia Pettersson next in line. The press release accompanying this, her fourth album, states that she "has created her sound by adding the rhythm and acoustic sound from jazz, and smooth and catchy melodies from soul and pop." While that does not actually make much sense, the general drift is readily apparent: "Buy it, kids. It's not really jazz."

On her previous albums, Pettersson deftly mixed standards with her own compositions. This time around she sings only her own songs, ten in all, with lyrics in English. One of these attempts to answer that age-old question, "What is Life?" Sofia has an answer: "What is hope my love? Where there is life there is hope. What is life my love? Without it we can't cope." Profound, or what? Of course, Sofia readily admits in another opus, "As I Am": "I only shown (sic) you half of me. Through the picture we show. Another one soon will grow. Isn't it so?" Well, yeah... I suppose.

Passing rapidly over Pettersson's philosophical musings, to her music, "Sofia Pettersson has a very personal sound with heartfelt expression," says the press release. Then why do her melodies and voice conjure up only faded sepia pictures of Joni Mitchell, Carol King and a hundred follow-on wannabes? The press release makes the same point but more piously: "Her music is uplifting Swedish jazz with a touch of musical influence from the American '60s."

As for Pettersson's voice, no less an authority than the Swedish east coast provincial newspaper Ostgota Correspondenten (circulation 60,000 daily) has described it as "soft as flowing honey on sorrowful silk." Personally, I find it more reminiscent of cod liver oil dripping onto a piece of mournful blotting paper.

Somewhere in amongst it all, there is a very good guitar solo by Erik Söderlind.

Like Brutus, I am an honorable man and I shall allow Sofia to state her case. In "Before I Go," she sings loud and clear, "Gotta fulfill my mission before I am ready to go. Than (sic) I'll get famous. That really would be great." I would just like to offer the following piece of admittedly not very original advice: don't give up your day job, dearie.

Where to Turn; Until Forever; Before I Go; A Day Or Two; In Another World; Sleep On It; All I Want From You; Martelli Tapes Tribute; As I Am; What Is Life?