Fred Hersch: In Amsterdam: Live at the Bimhuis 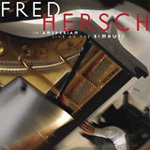 This live recording offers an exquisite sixty minutes of solo piano. In a mix of originals and standards, Fred Hersch's relaxed and loose approach (he didn't know he was being recorded) yields tunes that feel comfortably deconstructed—the ballads especially have a spacious air to them—and freshly re-imagined. Hersch's own voice is always paramount. It's as if, to give one example, he weren't playing the Hoagy Carmichael standard "The Nearness of You, but one of his own ballads that happened to borrow a few building blocks from Carmichael's song. The overall impression is less that of a series of jazz tunes with markedly different identities, but a suite of improvised solo piano divided into discreet movements.

In Amsterdam reaches its zenith with the fourth and fifth of the eight tracks, Hersch's original ballad "At the Close of the Day and his vast-roving cover of Antonio Carlos Jobim's "O Grande Amor. The former, as its title suggests, is a reflective piece, but also exploratory, using successions of rich harmonies and pronounced contrast between the high and low register of the piano. "O Grande Amor is reminiscent of Keith Jarrett's more inspired solo excursions, passing through angst and calm, searching through shadows and sunlight, and finally arriving at a falling Latin vamp to close.

This may be a stumper of a jazz trivia question in the years to come: Who was the first pianist to have a week-long run of solo performances at the Village Vanguard? The honor belongs not to any of jazz's elder statesmen, but Fred Hersch himself, who made this bit of history the first week of March, 2006.

Hersch approached the piano with a long list of possible tunes, from which he selected the set's varied program. It included his "atmospheric medley of Russ Freeman's "The Wind into Alec Wilder's "Moon and Sand, a bouncy jaunt through Billy Strayhorn's "U.M.M.G. (Upper Manhattan Medical Group) and Joni Mitchell's "My Old Man, on which he kept the melody intact over dissonant jazz harmonies below and seemed to have the most fun of the set. On "I'll Be Seeing You, Hersch made a case for himself as one of the premier ballad players today, with light, sprinkled right-hand lines, dark pillows of left-hand chords, and dynamics shifting at an impulse.

A Lark; The Nearness of You; Evidence; At the Close of the Day; O Grande Amor; The Peacocks; Don't Blame Me; Valentine.