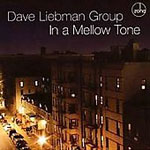 Don't let the title of Dave Liebman's latest disc, In a Mellow Tone, fool you. While the ambience is generally more relaxed than his usual fare, this is no easy-going collection of standards; instead what we have is an album that, for all its mellifluous aspirations, has a subtle intensity, and a certain feeling that all is not what it seems.

Leading off with a radically reharmonized version of the Ellington classic, "In a Mellow Tone," Liebman sets the tone for the whole album. While the recognizable theme is there, the underlying feel is one of brooding darkness. With bassist Tony Marino and drummer Jamey Haddad eschewing the more expected ambling lope, instead lightly implying a certain sense of peril, Liebman's arrangement may be accessible, but it is hardly easy listening. Liebman's playing is less aggressive than usual, but his expressionist leanings remain intact.

Guitarist Vic Juris continues to surprise and enlighten. With a style that sits, for the most part, somewhere between the melodious sound of Pat Metheny and the more oblique lyricism of John Abercrombie, he demonstrates a musical breadth of which few guitarists are capable. From the impressionistic self-penned "Chance of Rain," which is so visual one can see the clouds rolling in and hear the distant thunder, to Liebman's "The Sun King," originally written in the '70s when he was playing with Indian percussionist Badal Roy, Juris demonstrates a knowledge of everything from post bop harmonies to Indian raga form.

Liebman even manages to take the soporific melodrama of James Horner's "My Heart Will Go On," from the Titanic movie soundtrack, and turn it into a rubato tone poem that is poignant and pensive. "Change Up" is a free piece that features rich interplay between Liebman's soprano saxophone and Marino's bowed bass, before leading into a classical guitar solo by Juris that continues to demonstrate his broad stylistic abilities.

Sadly this is the final recording of the current version of Liebman's group that began in '91, following the dissolution of his more outgoing post-Coltrane band, Quest. Liebman states in the liner notes that a long-standing band "both artistically and from the listener's standpoint is consistently at a higher level than in temporary formations." With the effortless way in which the quartet navigates the material on In a Mellow Tone, Liebman's assumption is clearly supported. What will come next is anybody's guess, but In a Mellow Tone is a fitting swan song for a group; easy on the ears without losing its sense of adventure, and the culmination of a lot of obviously joyful hours spent playing together.

Visit Dave Liebman and ZOHO Music on the web.

In a Mellow Tone; Child At Play; Chance of Rain; The Sun King; Chant; My Heart Will Go On; Romulan Ale; Wow; Change Up; Vamp to Life