Improvising Where No Man Has Gone Before: Encountering William Shatner, Star Trek, And “The Wrath Of Khan” 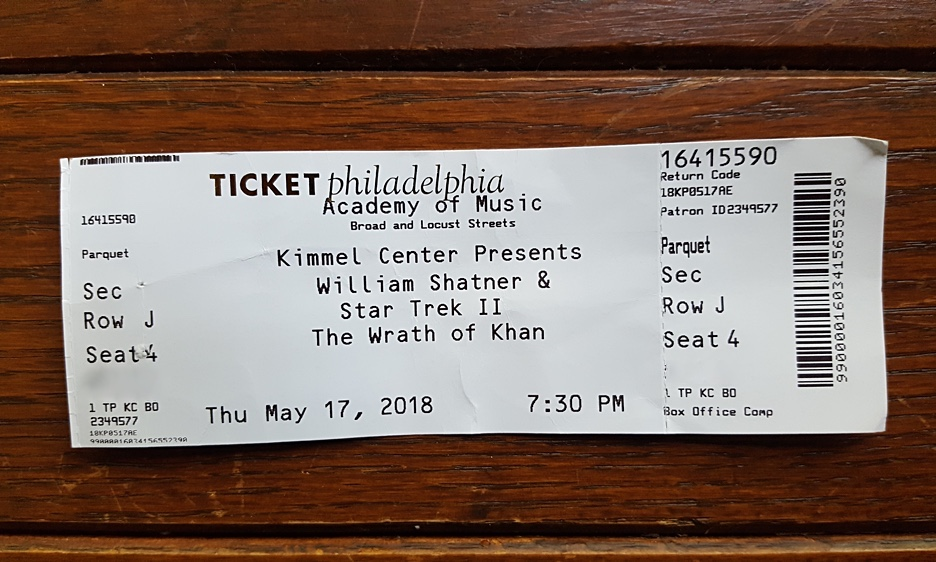 By VICTOR L. SCHERMER
May 22, 2018
Sign in to view read count
I am a Trekkie. No apologies for that. There are millions of us floating around in the universe. So when I saw that Captain James Tiberius Kirk, aka William Shatner, was going to appear in person and give a talk after a showing of the classic film, Star Trek II: The Wrath of Khan, I decided to go. I played a weird hunch that All About Jazz publisher Michael Ricci is also a Trekkie, and he confirmed my worst suspicion. He responded with the Vulcan Salute and "Live Long and Prosper." That was it. I wangled a couple of tickets for the event, held at the Philadelphia Academy of Music on May 17, 2018. Mike came in from the 'burbs, we dined at a local Asian restaurant called Sampan, and then went over to the Academy eager to take in the Trekkie vibes and hear what Shatner had to say.

Somehow, I felt compelled to write about this excursion away from my typical jazz interests, thinking rightly or wrongly that many All About Jazz readers are Trekkies, but I needed an angle. Surprisingly, the angle came readily to mind: improvisation. Jazz is improvised music. Star Trek was improvised from its very beginning, with its pilot TV episodes in 1964-65, when none of the cast quite knew what they were doing and had to make it up along the way, which has continued to be its modus operandi over the decades. In addition, Shatner and Leonard Nimoy, aka "Spock," both could be said to have improvised their own lives, often re-inventing themselves out of both necessity and choice. And in the fictional world of the crew of Starship Enterprise, improvising their way out of hair-raising situations was the repeated demand of the scenes that the producers, writers, and actors invented over and over again, often on the soundstage as the episodes and films were being made. The spontaneity, imagination, and improvising in the production of Star Trek, which comes through in the way the scenes are set up and acted, is part of what continues to draw people and makes them identify with the characters. It is also part of what makes jazz tick.

Star Trek was the product of the hippie era when all of us were improvising our lives, trying drugs, clothing, living situations, love relationships, you name it, as the spirit moved. It's no accident that during the height of the hippie period and political protests, the Star Trek movement took off (and it really is a social movement, what with collecting memorabilia, conventions, powerful identifications with the characters, groups of people talking endlessly with one another about the episodes). It's also not a coincidence that during the same era, jazz experimented with many new forms: hard bop, free jazz, fusion, world music, as if a door had opened up, allowing musicians to try new things. The opening words of each Star Trek episode said it all: "Space: the final frontier. These are the voyages of the starship Enterprise. Its five-year mission: to explore strange new worlds. To seek out new life and new civilizations. To boldly go where no man has gone before!" Sun Ra, John Coltrane, and Ornette Coleman would have heartily agreed with such an imperative. Their mission, too, was to encompass the whole universe in their music.

The show at the Academy started with a viewing of Start Trek II: The Wrath of Khan on a wide screen with blaring sound and the audience applauding, cheering, and giving the Vulcan salute as each familiar character came on the screen. I won't go into the elaborate plot and cast of characters. Suffice it to say that much of it revolves around the tyrant Khan Noonien Singh (Ricardo Montalban) seeking revenge on Captain Kirk, who had driven him into exile fifteen years earlier. Once he comes on, Montalban dominates the screen with his muscular physique and a face that seems to contain all the age lines of a battle-weary dictator. His powerful acting and the way the camera hones in on him makes all the other characters seem physically and emotionally small by comparison. Still, it was pure nostalgia and sheer fun for me to see the long time cast of Star Trek in action again: Shatner as Captain Kirk, Nimoy as Mr. Spock, DeForest Kelley as Dr. Leonard McCoy, Walter Koenig as first officer Chekov, James Doohan as chief engineer Montgomery Scott, George Takei as helmsman Hikaru Sulu, and Nichelle Nichols as communications officer Uhura. I did get caught up in the dramatic action and "space odyssey" sci-fi story and visual effects, but mainly, I was just riffing with the actors' own personalities showing through their roles as they seemed shamelessly to enjoy putting together this classic film. It reminded me of the way musicians like Dizzy Gillespie and James Moody injected a bit of humor into their performances, revealing something of themselves in the process. Improvisational theater is a wonderful art form in itself. Actors and jazz musicians sometimes bring such features of spontaneous drama and comedy into their own bailiwicks.

Right after the movie, the real, live, in-person William Shatner beamed on stage with a radio emcee he hand-picked for the occasion. At 87, despite his ageing gait and a few "senior moments," Shatner still has a bellowing voice and a winning ability to tell a story with a sense of humor about himself. I don't know why, but I'm really glad I got to see him just being there live on stage. It says something about how Star Trek, and especially he and Nimoy, infiltrated themselves into my life. I feel these guys became my pals even though I never came close to meeting them. (I really regret that I never went to one of those conventions at which they mingled with the fans.) Shatner regaled the audience with great and often ironic, funny stories about the Star Trek cast and films, also more seriously discoursing on life itself and what makes it meaningful for him. He is a rare personality who has brilliantly managed an eternally successful career, while at the same time having a rewarding personal life and enjoying the moment. Some, not all jazz musicians are like that. I think of Gillespie, Jimmy Heath after he recovered from his addiction, and Oscar Peterson. Would that we could all be like that.

So then, I'm really glad I stepped out of my usual role as a jazz writer and did this night out with my "boss" Mike. I had no idea to begin with what I would be able to put forth relating to the music. But, looking back, I think it is both the quality of spontaneity as well as the feeling of closeness to the players that Star Trek and jazz have in common. And I will never forget those hippie days when everyone let their guards down, got close, and lived in the moment. I think that, even though most of us from that generation went back to more conventional lives, we took a lot from those experiences that even now enrich our lives. And jazz and—thanks partly to Star Trek—television and the movies have never been the same since. The hippie era made an indelible impression on the whole universe. Even on distant planets.